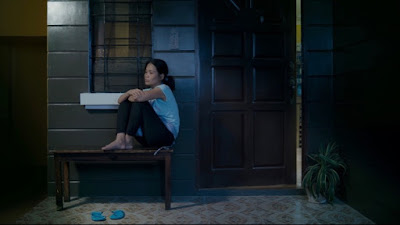 Korean-French documentarian Sung-a Hoon (FULL OF MISSING LINKS) turns her attention to the phenomenon of the Filipino maids who are trained to work overseas - principally in Asia and the Middle East. The resulting film is a quiet but powerful documentary that sheds light on a deeply disturbing export industry of essentially human labour. The vast majority of the running time is spent in what becomes an increasingly claustrophobic residential college where aspiring or returning maids are taught their craft. You might think this would just be how to best clean a house, but it's so much more than that. It's how to survive verbal, physical and even sexual abuse in countries where foreign labour is treated as second-class and these women are simply property. What's heartbreaking is seeing the deadpan straightforward expectation and experience these women have around abuse.  There's something really painful about seeing the instructors (all former maids) playing the role of mean female bosses and lecherous male bosses, and of the maids themselves describing their experiences to each other. The worst scene is when they discuss how to fend off a sexual attack, and the instructor tells them never to call the policy (because they wouldn't do anything?) but to tell the agency. And the over-riding lesson is to endure everything and just do the two-year contract because of all the dollars you can earn.  That even if you are abused, and can't see your kid, who won't recognised you when you come home, you are doing this for your family.

What I missed from this documentary was a look at the context in which these women make the choice to go overseas as maids.  How bad is it at home - how poor are they - that this seems like a good choice?  We get a hint of that when a couple of the women discuss the pressure at home from the in-laws to get a job, and the verbal abuse they get from them.  But I was hungry for more.  And I guess that's what makes this an amazing documentary, because it taught me so much but also made me curious for more.

OVERSEAS has a running time of 90 times. It is playing in this year's BFI London Film Festival but both screenings are already sold out. It does not yet have a commercial release date.
Posted by Bina007 at 08:02