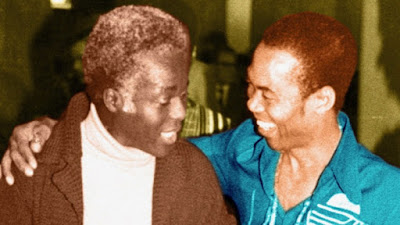 MY FRIEND FELA is another documentary about the iconic African musician and political activist - Fela Kuti.  It's much more insightful and even-handed than Alex Gibney's treatment a few years ago.  Cuban director Joel Zito Araujo's first feat is just to get into Nigeria, despite the continued political nervousness at Fela's criticism of politicians.  His second feat is to get access to musicians and lovers, and also to one of Fela's sons - although not Femi who seems to be the one who has most clearly continued his music and political legacy. The resulting documentary is concise, well-constructed and surprisingly even-handed account of the man.  He explores his childhood with a feminist political mother and the evident talent that got him into a classical music education in London.    At one point a musician explains Fela's technical mastery of the pentatonic scale and tries to explain why his music is so powerful.  The documentary then explores Fela's political education with the Black Panthers, and the resulting change in his look and music and message to weave his authentic Africa heritage into the jazz funk and classical music he was familiar with.  We see Fela become a harsh critic of the corrupt ruling Nigerian government and the horrific violent reprisals that brought him - resulting in the vicious rape of his wives and death of his beloved mother.

This is where it gets tricky of course - Fela's wives. How do we reconcile the activist who was so eloquent on the cause of pan-africanism and anti-corruption and proclaims himself the product of a feminist upbringing with the man who also claims polygamy is part of his heritage and seems to treat women as so many interchangeable harem members?  I love how balanced the film is. It doesn't trash Fela's reputation but it carefully shows us testimony from women who felt exploited and even footage of his dominance of the dance floor seemingly dragging a woman to dance by her head.  It's rightly provocative and makes you question how far we're able to overlook everyday sexism when someone is also being heroic in another manner.

The other thing I would say is even if you're not a massive fan of Fela's music - and if not why not?! - this film makes for a really interesting exploration of the black power struggle - and puts the American story of radicalisation in its wider global context. It makes for insightful social history.

MY FRIEND FELA has a running time of 94 minutes. It played Rotterdam 2019 and also one the Paul Robeson Award for Best Film at FESPACO. There are still tickets available for two of the three screenings at this year's BFI London Film Festival here.
Posted by Bina007 at 08:52