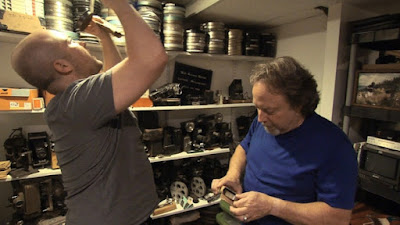 REWIND is a rightly disturbing watch - a deeply personal and heroic story of child sexual abuse spanning generations.  The director, Sasha Joseph Neulinger, is the admirable young man at the centre of the film. As a young kid and his sister were sexually abused by several family members.  The abuse of his sister prompts him to speak up to his mother, and what then follows is a long drawn-out search for legal justice.  We then get the all-too-familiar story of position and religion protecting a predator - the outcome is far from equitable.  The most heinous abuser never sees the inside of a jail cell.

What Neulinger does in this film is use hours of home footage taken by his father  to explore what happened in his childhood. The result is utterly sinister, as we see various family members in positions of absolute trust in the childhood home. The worst scene of all is the final one, with an uncle nuzzling the cheek of baby Sasha. We also get to know Sasha's father, a fascinating but enigmatic character who also suffered abuse. One wonders at his obsessive use of the camcorder - something that his wife says "put a wall up" between him and his family.  Maybe he found this psychologically necessary?

Despite the really tough scenes, this is ultimately a hopeful film, and for that Neulinger has to take the credit. Whether it's the fact that he managed to find a truly loving family and take their name, in one of the most touching scenes. Or the fact that Sasha is now an advocate for abused children and works with charities that makes their experience in the criminal justice system more protected and effective.  It's also a film that argues for greater understanding - with the startling statistics on child sex abuse shown at the very end. It's an unnerving watch - but an important one.

REWIND has a running time of 86 minutes. The film played Tribeca and will play the BFI London Film Festival 2019. It does not yet have a commercial release date.
Posted by Bina007 at 16:58