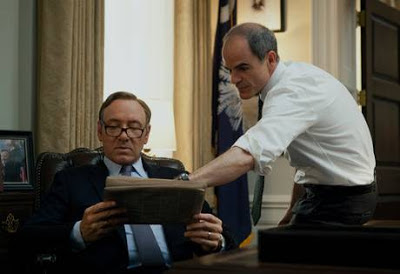 PLOT SUMMARY:  Congressman Frank Underwood (Kevin Spacey) returns to Washington, and tries to persuade lobbyist Remy Danton (Mahershala Ali) to convince Sancorp to mount a hostile takeover on Ray Tusk's nuclear companies.  Frank hopes this attack will prevent Tusk accepting the VP position because he won't want to put his assets in a blind trust.  However, it transpires that Danton has sold out Sancorp to Tusk, and that it's Tusk who is mounting a takeover bid on Sancorp.  Nonetheless, Tusk still endorses Frank, and as the episode ends, Frank has accepted the Vice Presidential role, although this has yet to be announced to the public.  He tells Claire (Robin Wright), but she does not tell him that she wants a baby and has sought medical advice. Meanwhile the Scooby Gang of Zoe Barnes (Kate Mara), Janine Skorsky (Constance Zimmer) and Lucas have tracked down the hooker, Rachel, who is still being controlled by Frank's fixer Doug Stamper (Michael Kelly).  He realises that they know about the Kern letter, the Russo arrests being over-turned and the other machinations.  As the episode, and series, ends, Doug is trying to call Frank to warn him, but he is out running with Claire.

COMMENTS:  It would be an understatement to say just how angry I am at the piss-poor ending of this series of House of Cards. It utterly cheats the invested viewer out of any kind of closure and we should all boycott the now necessary series 2 in protest.  It's the worst kind of bullshit since the US series of The Killing, and shows that as slick, and well-acted as this series might have been, commercial interests have trumped simple good storytelling.  It also means that the original British series, with its desperately tense climax, remains the superior story.
Posted by Bina007 at 20:41