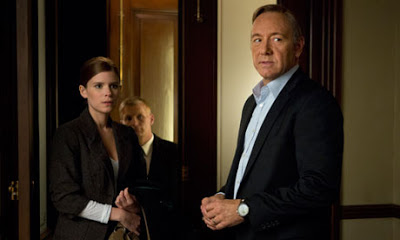 PLOT SUMMARY: Congressman Frank Underwood (Kevin Spacey) turns his attention to Peter Russo's (Corey Stoll) gubernatorial campaign. The plan is to confess to his addictions and frame a recovery story. To do this, Frank uses Zoe, who in turn hands the puff piece to Janine Skorsky (Constance Zimmer), baiting her to leave the Tribune for Slugline. Frank also calls in his favour from the President, getting Linda Vasquez to lean on the Vice President to stop intervening in the allocation of his old seat. Russo has cold feet, but Christina convinces him to run, and they reunite. Meanwhile, Frank's sidekick Doug Stamper (Michael Kelly) bails out the whore he paid off earlier in the season. Zoe lobbies the owner of Slugline on Janine's behalf and gives her former colleague Lucas the cold shoulder.

COMMENTS:  We're now into the episodes directed by Charles McDougall, who I respect greatly for his work on the seminal Hillsborough disaster fictional recreation, as well as the original Channel 4 Queer As Folk. That said, I found this episode rather slow - with neither political skulduggery nor emotional stakes. One can only hope it's laying tracks for a big finale to the second half of the season.  I feel like we wasted an episode going back and forth on whether Peter would run. Wasn't that what the powerful razor scene at the  end of the last episode was all about? And as for Doug's romantic attempt to save the beat-up hooker - dull and implausible that he would drag in Nancy. I also find it implausible that a) Janine would apologise to Zoe and b) that she would fall for her help in getting into or c) want to go to the risibly named Slugline.

As for the final scene between Frank and Zoe, my misgivings about the casting of Kate Mara as a sexy ingenue continue.  The final line about her wishing Frank a happy father's day could of course be interpreted in may ways.  Frank's metaphorical children - the people like Peter he keeps under his wing - maybe her. If it really does refer to a biological child I'll lose respect for Frank and for Beau Willamon's writing in having Frank make such a major damaging reveal in an offhand comment to a journalist.

The things I liked about this episode were on its fringes.  I love the way in which recovery is handled. In fact, this is one of the few times I've seen a meeting on screen. Doug Stamper's share is superbly articulated: "fuck the zero" is the first line of this new series that matches the original's "I couldn't possibly comment". I also love the melancholy motif of the Vice President, sidelined, irrelevant, taking the President's chair in the Oval Office: a realistic dark backing to the satire of Ianucci's Veep.