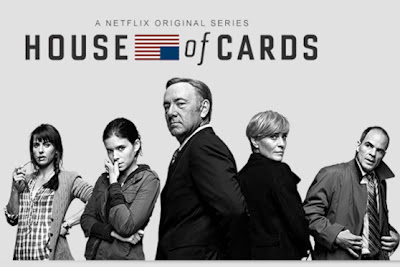 Plot summary: A month has passed and the national teachers' strike causes President Walker to question Chief Whip Frank Underwood's (Kevin Spacey) judgement.  The pressure on Frank is exacerbated by Frank bungling a CNN debate with the union leader, Spinelli (Al Sapienza).  Undeterred, Frank refuses to gut the bill, and uses journalist Zoe Barnes (Kate Mara) to point the blame at Spinelli when a kid who should've been in school is shot on the street.   He then goads Spinelli into throwing a punch, which ensures his bill will pass. Meanwhile, a newly sober Pete Russo (Corey Stoll) starts recovery, making amends to Christina. He also starts his campaign for Governor, helped by Claire's proposal to redevelop the shipyard as an environmentally friendly development, generating thousands of jobs.  Separately, Claire hears the deathbed confession of Frank's former security guard, in which she explains the nature of their love and marriage.

Comments:  I suppose it was inevitable that at the half way point of the series, we would have to see our anti-hero, Frank, brought low.  It's always a good test of how much you're invested in a character: how much you squirm when they stumble.  I  hated seeing Malcolm Tucker made irrelevant at the end of The Thick Of It season 3, and I could barely look at Frank's omnishambles.  This is a good thing.  Elsewhere, I'm a bit disappointed that the Zoe character, who was turning into quite an enjoyably manipulative player, seems to have been sidelined.  Similarly, Claire had seemed rather Machiavellian, and I had high hopes of the bodyguard's deathbed confession, but nothing revelatory happens there either. It all feels rather banal and slow-paced - maybe Schumacher's direction or just a mid-season lull?  Even the insults seem rather juvenile. Frank bully Spinelli: "I can smell the cock on your breath from here."  Where's Tucker when you need him?  I'm also starting to get rather tired of Beau Willamon flirting with shark-circling writing. Don't get me wrong: it's not as bad as the Homeland season 2 pacemaker assassination, but would Spinelli really have thrown a punch?
Posted by Bina007 at 11:58