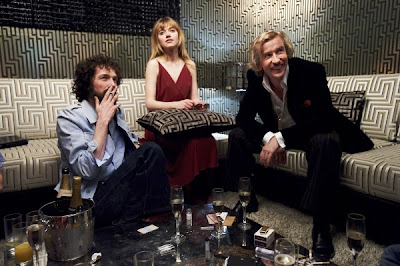 I find Steve Coogan fascinating but I suspect he finds himself even moreso. Why else does he persist in authoring projects where he plays refracted versions of himself? The chippy Northerner with unreal talent, parleying that into success with radical and daring work - super confident to the outside world and yet always eager to tell us just how well-read he is - commercially brilliant but with a controversial and unconventional private life. Charming, subversive and slippery. That's my take on Coogan. It would also be a good description of the character Coogan played in Michael Winterbottom's superb Tony Wilson biopic, 24 HOUR PARTY PEOPLE. And it's also a good description of the legendary Soho strip club owner and property mogul, Paul Raymond - the subject of the latest Winterbottom-Coogan collaboration.

As the film shows us, Raymond had an uncanny ability to make money, pushing the boundaries of UK legislation in producing nude shows and magazines. Cleverly investing the money in property, he became Britain's richest man. But this is contrasted with his literally pathetic personal life, as signalled by the movie's title, THE LOOK OF LOVE. And here we get into the most slippery territory of all.

If anything, his sad fault seems to be a more general lack of empathy - a kind of emotional neutering. When his wife leaves with his son, he seems to simply turn off any remembrance of him. When his illegitimate son turns up, he's charming for one night, as one might charm a business acquaintance, but then shakes his hand and sends him on his way. He seems to love his wife and girlfriend, but not to the point of giving them the monogamy that they want.

And then there's the pivotal relation with his daughter Debbie (Imogen Poots), who longs for a career as a singer and is groomed to take over his empire. Paul seems to love her but in a completely unboundaried way that involves exercising no parental discipline. When he catches her doing coke with a marvellously bearded and sinister Chris Addison, he just tells her to do the best quality, and is seemingly blind to her inner despair.

In the end, what do we learn about Paul? That he was a charming, highly talented businessmen with very messy relationships. It was arguably better to be ignored by him than loved by him: his love involved a fair amount of delusion and denial. I felt bad for him. I wondered if he succeeded in impressing himself? Whether knowing Ringo Starr had designed his flat reassured him that he'd arrived. But this was a man so conscious of his own public image, so polished and repressed that one hardly scratches the surface with this film.

And what of the film? The production design, score, casting are all superb. I love the way Winterbottom's fluid handheld camera brings us right into the action and emotion, and the editing that beautifully juxtaposes a funeral with a wedding. But the movie is not as consistently high energy as 24 HOUR PARTY PEOPLE or A COCK AND BULL STORY nor as formally daring as TRISHNA. Rather, it's a basically linear biopic that largely reduces a complex man to one tragic relationship. And sadly, when that relationship takes centre stage roughly half way through the film, it dramatically loses pace.

THE LOOK OF LOVE has a running time of 101 minutes. The movie played Sundance 2013 and will be released in the UK on April 26th, in Australia on April 27th and in the Netherlands on August 22nd.
Posted by Bina007 at 15:00