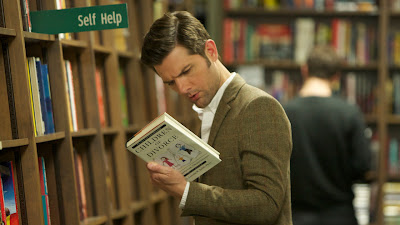 Writer-producer Stu Zicherman's directorial début is a heartfelt, sporadically funny but overwhelmingly tepid relationship comedy about a guy called Carter who is still so traumatised by his parents divorce that he derails his kid brother's wedding. Zicherman's contention is that his peer group of thirty something Americans is the first generation to have to deal with errant parents, step siblings and general emotional chaos, leaving hem with, at best, a bunch of practical coping mechanisms that hide deep set neuroses. They are the ACODs of the title - Adult Children Of Divorce. The protagonist in this film is a case in point. On the surface he seems in control, a classic manager of chaos. He's spent his life resenting his parents, protecting his younger siblings and seeking the stable in his girlfriend. But when forced to broker both of his parents turning up to his brother's wedding, he discovers that he was actually the subject of a book on kids dealing with divorce. And his evident continued difficulties sparks a sequel.

There's a lot to like in Ben Karlin and Zicherman's script. There are moments that feel authentic and clearly come from personal experience. Some of the verbal humour is also fantastically on point, and there are a fair few laugh out loud moments, mostly related to Carter's dad who is played by Richard Jenkins, and totally steals the movie. I also admire their courage in not having to tie up all the ends neatly. But set against this we have characters and sub plots that seem to go nowhere (Jessica Alba I'm looking at you), a highly contrived moment of catharsis in the final act, and, well, the casting of the lead actor.

Adam Scott is often the supporting actor in mainstream pictures: the classic decent boyfriend who has a side seat for the action. Maybe it's because he's not a conventionally Hollywood chiselled leading man? I think he's a decent actor but there's just something off about him in this role, and I've come to the conclusion that he's just not likeable or charismatic enough to carry a film. I know that sounds mean, and that many character actors are wonderful when given the stage - not least Richard Jenkins. I also realise that Scott is playing an uptight worriwort, and that isn't a role you'd think of as being fun to spend time with. But Carter is at the centre of this film and one must be happy spending time with him, otherwise the film doesn't hang together. Just imagine what the movie might have been like had it starred Andrew Lincoln or maybe Josh Radnor?

A.C.O.D. played Sundance and Sundance London 2013. It does not yet have a commercial release date.