THE PLACE BEYOND THE PINES 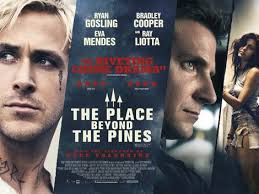 Writer-director Derek Cianfrance follows up his critically acclaimed, intimate, raw portrait of an unraveling marriage, BLUE VALENTINE, with what he describes with a male melodrama about fathers and sons.  Both movies are an unflinching examination of real people making bad decisions for the best of reasons. But where VALENTINE feels brutally real, PINES has a self-conscious symmetry - a deliberate interweaving of plot points and characters that lifts us out of the real and into the archetypal.  This is a movie that is architectural - whose structural underpinnings are it's point - and that willingness to put the whale-bones outside of the flesh almost, but not quite, threaten to obscure our emotional response to the material. That it doesn't, speaks to the fine performances at the heart of the movie.

As the movie opens, we see a bravura tracking shot of Ryan Gosling's motorcycle stuntman, Luke, walking through the back-alleys of a circus, his small-town fans cheering him as he enters the tent. Three stuntmen will ride bikes over and around each other in the tight confines of a rotating metal framed ball  - an elaborate metaphor for the feat that Cianfrance is trying to pull of with this film.

The first act of the film is Luke's story.  He rolls back into town to find he fathered a baby after a one night stand with Eva Mendes' Romina. She's living with Kofi (Mahershala Ali) - an archetypal good father who can provide everything Luke can't - a house, stability, commitment.  Somewhat predictably, Luke falls into bank robbery, tutored by Ben Mendelson's Robin, with immediate success but ultimately catastrophic results.   The hackneyed tale of a heist gone wrong is elevated by Ryan Gosling's absolute commitment to the role, the high-energy cinematography, the creeping sense of foreboding and, perhaps surprisingly, Eva Mendes.  There's a scene where Romina is asking Luke how he's going to take care of her, and Luke begs her not to talk down to him, not to assume he's as worthless as everyone else thinks he is, that is absolutely heartbreaking.  It's heartbreaking because we see how desperate Luke is to break the cycle of absence and neglect that he lived through, and heartbreaking because we know that Romina loves Luke, but that she loves her son, and his future, more.

In the second act of the film we focus on Avery (Bradley Cooper) - the cop that gets shot in an altercation with Luke.  He's also a young father, also trying to do right but caught up in nefarious shit. His story is also mired in predictability - Ray Liotta cast as a corrupt cop - and the pace is much slower.  I have always thought Bradley Cooper a good actor, but at first I thought his performance in this segment fell rather flat. I just wasn't convinced he'd found the character. And then I realised that this was exactly what we were meant to be falling, because Avery hasn't found his character.  He's a guy constantly defining himself against other's expectations.  His father, a judge, wants him to be a lawyer. The police chief wants him to be a hero.  The rozzers want him to take the cash. And he thinks he wants to just be a good dad.  Turns out, he wants more. It's a subtle performance, and one that's nicely complemented by Rose Byrne as his wife.

In the final act of the movie, we fast forward to the present day, where Luke and Avery's sons are now teenagers at the same public school, although from radically different economic backgrounds. Indeed, Avery is now a man of some power and complacency, and his son  AJ (Emory Cohen) is a sinister, drug-fuelled bully.  Already exploited by AJ, when Luke's son Jason (Dale DeHaan) figures out their fathers' relationship he flips into a spiral that brings Avery face to face with his past in a lurid, melodramatic denouement that is at once utterly unrealistic and majestic.  Bradley Cooper is masterful in his final scene.

What should we make of this film? Clearly, it's macro structure forces it into highly stylised pairings and plot points, but this is not a weakness.  It gives colour and provocation, and doesn't alienate us because each section is so filled with deep emotion and finely shaded moral dilemmas.  In other words, this movie has heart as well as style.  In fact, it's something of a tour de force.

THE PLACE BEYOND THE PINES played Toronto 2012 and is already on release in the USA, France, Denmark, Finland and Spain. It opens this weekend in Belgium, Italy, the Netherlands, Singapore, Norway, and Sweden. It opens on April 12th in the UK, Ireland, Greece and Lithuania.  It opens on April 18th in Russia. It opens on May 2nd in Croatia; on May 9th in Australia; on May 24th in Poland, Taiwan and Japan; on June 14th in Turkey; on June 20th in Germany and on June 28th in Mexico.