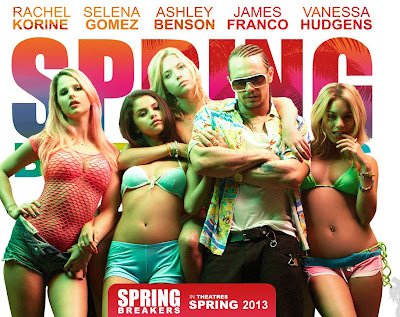 Almost every review I read of SPRING BREAKERS after watching it described the movie as a kind of "fever dream" which is presumably lifted from a PR-prepared media packet and says more about the laziness of the mainstream critics than the film itself.  For me, the film was less a fever dream than an elaborate revenge fantasy with feminist overtones that belied its apparently sexploitation vibe.  The subversive message, and the careful balance between absurdist humour and the deeply sinister had me on the edge of my seat.  SPRING BREAKERS may, then, occasionally, be deliberately bad, but it's not a bad film, and every provocation it makes is deeply thought out and played out with utter conviction.

The movie is written and directed by Harmony Korine - the writer who worked with Larry Clark on the controversial but brilliant teen sex and AIDS drama, KIDS. He brings that same authenticity to SPRING BREAKERS, with its willingness to examine the allure, the stupidity and the decadence of teen culture all at once.  As the movie opens, we meet four teenage girls desperate to escape their banal lives and go on vacation to Florida.  Somewhat improbably, three of them decide to commit a robbery to fund their trip. It's not an immoral act so much as an amoral act - they seem to live in a world without consequences or impulses other than those originating in their own desires.  This behavior continues in Florida - they get drunk, get high, and it is only by a whisper's breath that they aren't raped.  To be sure, there's plenty of simulated exploitation in the way they're photographed by the over-riding message we're getting is not to be titillated but shocked at their stupidity and awed by their luck in not coming a cropper.

The exception is Selena Gomez' rather obviously named Faith, who is an evangelical Christian.  She goes along on the trip funded by crime, and is at first the most mesmerized by the promise of Spring Break - the idea of freedom away from home.  But, tellingly, she's also the first to see the danger inherent in the girls' open-ness.  What I love about Korine's treatment of this character is that in the context of the MTV does Cancun shooting style of the film - all lurid color  thumping soundtrack, close ups of girls getting pissed and showing their tits - it would have been easy to mock Faith's naivety and, well, faith. This is  in fact what we see the other girls do.  But in fact the movie has an unspoken respect for Faith, and she is allowed to escape with her morality and beliefs in tact.

The remaining three girls continue to come off as frighteningly stupid and ripe for exploitation as they take up with James Franco's rapper, Alien aka Al.  This may well be Franco's greatest performance - combining as it does some really sinister movements with laugh out loud humor.  When Alien tries to groom Faith, persuading her to stay, he comes off as a deeply sly and manipulative character dripping with hatred of the white trash teens.  Then again, as we get to see him more, we realise that he's in fact far more naive and ripe for exploitation than the girls. In fact, he's a rather pathetic figure.  Franco also has the best lines of the movie, as he articulates his value-structure in terms of the American Dream. It's a speech so funny, so pathetic, so damning of American consumerist culture that it's worth repeating:

"This is the fuckin' American dream. This is my fuckin' dream, y'all! All this sheeyit! Look at my sheeyit! I got... I got SHORTS! Every fuckin' color. I got designer T-shirts! I got gold bullets. Motherfuckin' VAM-pires. I got Scarface. On repeat. SCARFACE ON REPEAT. Constant, y'all! I got Escape! Calvin Klein Escape! Mix it up with Calvin Klein Be. Smell nice? I SMELL NICE!"

In that speech we see that Alien is as bound up in a fantasy as Faith is. She wants to escape her banal life by coming on Spring Break and staying there forever, and Alien has apparently succeeded in just that mission.  It's so absolutely right that he would compare himself to Al Pacino in Scarface, although he's blind to the true meaning of that story. And how subversive and glorious to cast pretty teen cover boy Franco as the metal-mouthed rapper, aspiring to the perfume ad perfection that Franco, in real life, did so much to perpetuate.

As the film moves into its second act, we see Alien and the three remaining girls go on a spree of robberies, which are evidently idiotic insofar as they incite the wrath of a competing drug gang.   While the girls appear to think they're in a rap video, come first-person shooter, Rachel Corine's Cotty soon learns different and she too departs.  As much as I loved that Faith was allowed to leave, I was equivocal about the message Harmony Korine was giving in allowing Cotty to escape relatively unharmed, both in this later pivotal scene, and in an earlier Girls Gone Wild moment that could so easily have ended in rape. This is the only small criticism I would make of the film.

Faith, Cotty and Alien are clearly delineated because, for all their delusions, they are deeply human. They care.  They love. They are scared. By contrast, Vanessa Hudgens' Candy and Ashley Benson's Brit are so interchangeable that it's barely worth learning their names.  But they are memorable because unlike Cotty and Faith and Alien they are utterly without morality, utterly without regret or fear or love or delusion.  They are what they are - natural born killers.  They don't go to Florida to escape themselves, but to become more fully what they always were: first-person shooters who are more than aware of the stereotypes their gender and dress give off, and more than happy to humiliate any man who seeks to exploit them as a result.  Their proto-feminist revenge is a fantasy - by this point the film has let go of any anchor it might have once had to reality, but it is deeply emotionally satisfying and cathartic, at the same time as being horrifying. After all that gyrating and objectifying it is the girls who are objectifying the men, and not as sex objects but as targets in a video game.

I loved this film. I loved the intelligence with which it mimicked an exploitation genre but subverted it.  I loved the day-glo cinematography and the use of voiceover with its lullaby repetition - similar to Malick.  I loved the uncomfortable mix of menace and pathos and dark humor - the sharp turns that catch you unaware and the moments of intimacy and authenticity.  This is a memorable film and a powerful film and deserves to be seen.

SPRING BREAKERS played Venice and Toronto 2012 and was released earlier this year in France, Italy, Denmark, Spain, the USA, Belgium, Germany, Hungary, Israel, Serbia, Bulgaria, Estonia and Canada. It i s currently on release in the UK, Ireland, Poland, Romania, the Netherlands and Norway. It opens on April 26th in Lithuania, May 2nd in Portugal, Singapore and Mexico, on May 9th in Argentina, Australia, New Zealand and Russia and on June 15th in Japan.