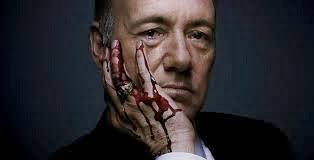 PLOT SUMMARY: Vice President Frank Underwood (Kevin Spacey) is trying to broker a bipartisan agreement to avoid a government shut-down on the eve of the State of the Union address.  He is blocked by businessman Ray Tusk (Gerald Mcraney) and has to endure the jibes of President Walker (Michael Gill) but succeeds by forcing the recall of all non-voting politicians.  Unbeknown to Frank, trouble is brewing.  The late Zoe's lover, journalist Lucas  Goodwin (Sebastian Arcelus) allows a mysterious hacker access to his newspaper's servers and arranges a meet-up in hopes of getting Zoe's cellphone records.  Meanwhile the ex-hooker Rachel (Rachel Brosnahan) is now working at a call centre, closely monitored by Doug Stamper. Against his threats to talk to no-one, she contacts her mother and joins a Church. And in an enigmatic scene, Jackie Goodwin (molly Palrer) has a tfloral tattoo enlarged, perhaps each poppy represents the scalp of a felled rival?

COMMENTS: Behind the camera, this episode changes hands to director James Foley (the marvellous GLENGARRY GLEN ROSS) and playwright Bill Cain, and the actions shifts to a slower pace in the corridors of Washington power broking. The writers keep the action relevant focussing on a potential government shut-down and we see Frank endure the taunts of the President as he edges near the centre of the frame.  There are no whizz-bang moments here and I was curiously underwhelmed by what should've been the high tension thrills of seeing Lucas trying to nick his newspaper IT chief's phone and communicate with the hacker. Compare the phone-calls he gets from his hacker with the contact from Deep Throat in ALL THE PRESIDENT'S MEN.  This series just falls ways short.  In fact, by far the creepiest things in this episode were Jackie getting her tattoo extended - what the frack is that all about? - and Rachel being befriended by the evangelical on the bus.  Are they setting Rachel up for a Lancel Lannister style religious conversation after which she spills the beans? Or is the friendly Christian a plant? Either way, that's where my interest now lies. Also, disappointing not to see more on Claire's inner psychology.
Posted by Bina007 at 11:04