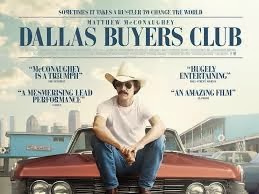 The movie is inspired by the true story of Ron Woodruff, a good ole boy from Texas with all the associated bigotries, who was diagnosed as HIV positive in the mid-80s. It was an unforgiving era of paranoia about the AIDS epidemic, when doctors approached you with masks, and your community shunned you.  Add onto this the macho culture of a Texan rodeo town, and you have a desperate man, consigned to the margins, with a deep-grained prejudice toward his fellow victims.  What follows isn't a schmaltzy emotional enlightenment, a la PHILADELPHIA.  When Ron becomes close to Rayon, a pre-op transexual, it's because he needs an in to the gay subculture where he can peddle his under-the-counter anti-HIV meds, partly to finance his own use. To be sure, there are hints and flashes of a deeper understanding, and maybe affection, blighted only by Rayon's drug use, but this isn't that kind of movie.

What kind of movie is it? I'm not sure, and I'm not sure the writers are either.  At times, it feels like an odd couple dramedy with a mean old homophobe discovering his heart.  And at other times, it feels like they're trying to make an ERIN BROCKOVICH type issues move - equally concerned with Ron's fight against Big Pharma, and its rigged clinical trials pushing AZT as a treatment.  In the final act, the movie even pushes Ron into a courtroom drama, where he is demanding the right to take other medications that have not been approved by the FDA.  And the movie kind of fizzles out, and we learn that the Big Bad AZT actually wasn't so bad at all, apparently. Which is a bit of a damp squib conclusion.

By this point I'd come to the conclusion that DALLAS BUYERS CLUB was not a film with a unique and powerful directorial vision that director Jean Marc Vallée's debut feature had.  It's best viewed as a delivery vehicle for two great performances. The first of these is the least surprising: Matthew McConaughey has reinvented himself as a boundary-pushing character actor of the highest quality in BERNIE, KILLER JOE, MUD, THE PAPERBOY and  now here.  He doesn't shy away from showing the cold selfish arrogance of Woodruff, even in his supposedly reformed state, but also never lets him become a monster or a saint. It's a nuanced and fantastic performance.  The second great performance is from Jared Leto, as the pre-op transexual Rayan - vulnerable, world-wise, loving, damaged.  Both deserve the awards-season plaudits they're getting. So, is this a genuine BEST PICTURE contender? No. Is is worth seeing? Yes.  Beyond doubt.

DALLAS BUYERS CLUB has a running time of 117 minutes and is rated R in the USA.

DALLAS BUYERS CLUB played Toronto 2013 and was released last year in the USA and Canada. It was released last month in Portugal, the Netherlands, Singapore, France, Israel, Italy and Finland.  It was released early this month in Belgium, Germany, Denmark, Estonia, the UK, Ireland and Mexico. The movie opens this weekend in Australia and Greece; on February 20th in Hong Kong, New Zealand, Slovakia, Brazil and Japan; and on February 27th in Argentina, Paraguay, Turkey and South Africa. The movie opens on March 6th in Hungary, Serbia and Sweden; on March 14th in Spain and Poland and on March 21st in Norway.