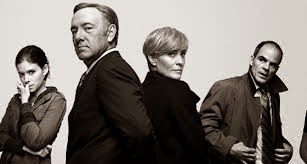 Meanwhile, Lisa (Kate Lyn Sheil) turns up at Rachel's (Rachel Branathan) apartment having been threatened by a meth-addict friend, and reveals her own past heroin-addiction. Rachel offers to take her in, and they start an affair.

Lobbyist Remy Danton (Mahershala Ali) courts Claire's disgruntled ex-employee. He also courts a photographer who used to work for Adam Galloway (Ben Daniels), Claire's former lover. Remy also denies that he knows how the Republicans are getting the money to Majority Whip Jackie Sharp (Molly Parker).  Jackie offers to consider having a proper relationship. She continues to block Claire's Bill.

Claire Underwood tries to persuade another rape victim to go before the press to aid the passage of her bill. She befriends the First Lady (Joana Going) but is clearly trying to get the President (Michael Gill) to publicly back the Bill. She also suggests the Walkers see a marital therapist - Reverend Thomas Larkin (Tom Galantich).

COMMENTS: Women seem to be just putty in Claire's hands! It's almost embarrassing watching the First Lady crumble. And how can Rachel be so credulous? I remain suspicious of her new flat mate. And also of Netflix's motives in including a gay love affair between two hot chicks. Ah well. I'm also falling into boredom at the whole Remy Danton investigation and indeed, the Adam Galloway affair. It feels too much like grist for the plot rather than something actually original and captivating. Shame.
Posted by Bina007 at 14:54