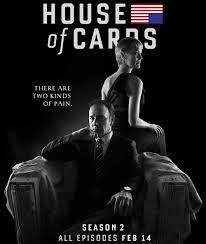 PLOT SUMMARY: As Season Two opens, the Majority Whip Frank Underwood (Kevin Spacey) is on the verge of being made Vice President and needs to clean up the mess from last season and shore up his power base. The first involves eliminating anyone on the trail of the murder of wildly self-sabotaging Congressman Peter Russo (Corey Stoll) by pushing journo-blogger and ex-lover Zoe Barnes (Kate Mara) under a train. It also involves Frank's sidekick Doug Stamper (Michael Kelly) riding hooker Rachel Posner (Rachel Brosnahan) out of town. The second task sees Frank corrupting the rising political star Jackie Sharp (Molly Parker) by giving her the dirt on her two rivals to become the new Majority Whip. On the other side of the bed, Claire Underwood (Robin Wright) explores the possibilities of an over-40s pregnancy, and buys off her disgruntled former employee Gillian Cole (Sandrine Holt) by offering her the leadership of CWI.

COMMENTS: I spent much of last season railing against how this version of House of Cards was less subtle, less dark and less fast paced than the British original. This left me with nothing but rage and disappointment. So this season I have vowed to ban the original (also available on Netflix, and reviewed on this site) from my thoughts, and to take Season 2 on its merits. The opening episode certainly packs a punch - a punch that should've arguably been the climax of season 1. But no matter: it was wickedly fun to watch Frank and Claire clean up their mess from season 1. I loved Frank's corruption of the all-too-easily corrupted and ambitious Jackie - but wasn't it a bit naive to just let her sit at his laptop? And I also love that Claire is now trying to get pregnant - a move I can only presume is motivated by being the perfect political wife - just as she wants Frank to give up smoking. She seems to change her mind after threatening to let Gillian's baby "wither and die inside her" - a far more chilling moment than Zoe's murder.  I'm really fascinated to learn more about her psychology - giving up a child and CWI - what does she get in return?

But of course, the real test of this episode is how you deal with the murder of Zoe. Personally, I felt it didn't have the power of the original UK series (I know!) because the relationship between Frank and Zoe had never been as psychologically warped and intimate as between Mattie and Frances. There was something casually efficient - bureaucratically necessary about Zoe's death - whereas in the UK version, Mattie has more than an air of the bunnie boiler about her. Still, I suppose as an indictment of cool ambition, this version has the virtue of being All About Business. My only other gripe is that in the age of CCTV is killing someone in a metro station really wise? The mysterious be-hatted figure walking against the rushing crowd?  Also, what's with the lack of straight-to-camera snarky commentary from Frank until the end - and what a relief when it returns!