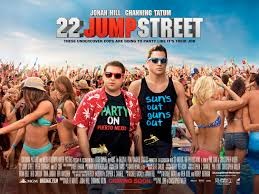 I loved the Channing Tatum-Jonah Hill brom-edy 21 JUMP STREET.  The reboot was fun, clever, and I was genuinely rooting for the two buddies as they took down a nasty drug dealer by posing as kids in a local school.  Sure, the whole concept was hokey but the actors and directors seemed perfectly at ease with that hokiness.  I was trying to figure out what had gone wrong with the only patchily funny sequel, 22 JUMP STREET and I think it comes down two things. First off, there isn't enough warm-hearted bromance before we get to the debbie-downer homo-social break-up.  As a result the bickering to fun-stuff ratio is just off.  Second, we get it: you're smart and post-modern and meta-clever!  All those jokes about how sequels suck, and movie audiences just want the same dang thing over and over, and how the budget all goes on cheesy action shots just made me feel like the movie was poking fun at me for liking what I got in the original and wanting it again.  All that winking at the camera just undermined by ability to sympathise with the characters and that's fatal - because whatever else this movie has, it should have heart.

Anyways, what's it all about? We're united with buddy cops Schmidt (Jonah Hill) and Jenko (Channing Tatum) after their sucessful high school drugs bust. It feels like we've been derailed from the promised sequel where they go undercover at college but after the prologue we 're back in the groove.  Pretty soon Jenko's playing college football with his frat-house buddy Zook (Wyatt Russell) and Schmidt's exploring his hipster side with girlfriend Maya (Amber Stevens).   The rift gets so large that Jenko even considers giving up being a cop to play ball, until the search for the campus drug dealer takes our buddies to a final showdown in Mexico over Spring Break - allowing the directors to spoof Harmony Korine as much as BAD BOYS.

Maybe the start of this review came over as grumpy.  There are patches in this movie where the humour runs a little dry but then again, thinking back on it, there are so many exceptionally  funny laugh out loud moments. All it took was for Channing Tatum to utter one word in a fake high-pitched Mexican accent in the prologue and I was in hysterics.  Pretty much everything The Lucas Brothers did was both funny and endearing. The scene where the cops go back to jail to see the guys they put away in the first movie was creepy, brilliant and hilarious: Dave Franco I feel your pain! And the true break out comedy star of the show is Jillian Bell as Maya's creepy room-mate. Sure Ice Cube over-acted and Queen Latifah was wasted, and the movie was probably 30 minutes too long but when it worked it really worked.  So overall, I guess an enthusiastic thumbs up: being not quite as good as 21 JUMP STREET is still plenty good.

22 JUMP STREET has a running time of 112 minutes and is rated R in the USA and 15 in the UK for frequent strong language, strong sex references, violence.

22 JUMP STREET is on release in Australia, the Netherlands, the UK, Ireland, the USA, Hong Kong, Israel, Uruguay, Canada, Ecuador, Estonia, Iceland, Jamaica, Lithuania, Latvia, Poland, Romania,Switzerland, Egypt, Indonesia, the Philippines, the UAE, Bahrain, Denmark, Iraq, Jordan, Kuwait, Lebanon, New Zealand, Oman, Qatar, Russia, Singapore, Syria, Ukraine, Bulgaria, Ethiopia, Vietnam, Sweden, Peru, Norway, Venezuela, Belgium, Azerbaijan, and Chile. It opens in Bolivia and Portugal on July 10th; in Italy on July 23rd; in the Dominican Republic on July 24th; in Spain on July 25th; in Germany on July 30th; In Greece, Kenya, Nigeria, and Taiwan on August 8th; in Thaiiland on August 12th; in Malaysia and Colombia on August 15th; in Hungary, Austria, Finland and Turkey on August 22nd; in France on August 27th; in Argentina and the Czech Republic, Croatia, Serbia and Slovenina on August 28th; in India and Mexico on Augnust 29th; in Brazil and Slovakia on September 4th; in South Africa on September 5th and in South Korea on October 14th.
Posted by Bina007 at 12:25