DAWN OF THE PLANET OF THE APES 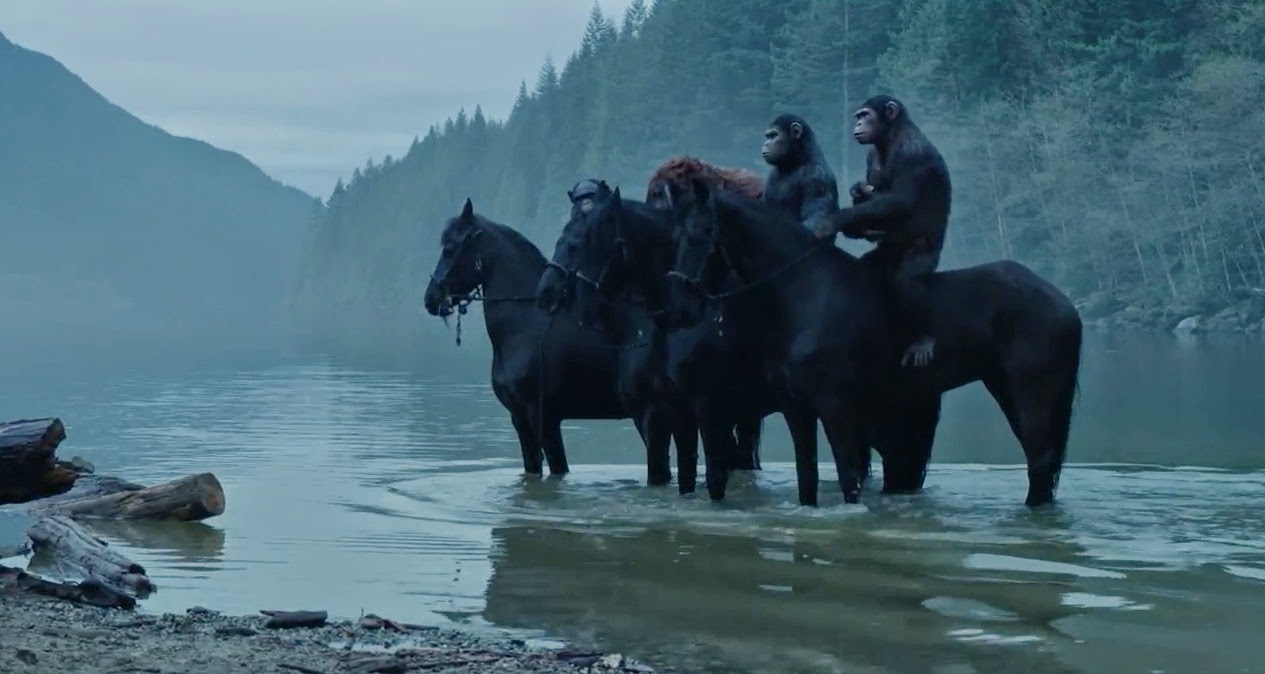 DAWN OF THE PLANET OF THE APES is a handsome, earnest if somewhat hamfisted sci-fi action movie that dazzles visually but grates emotionally.

Five years after the events of the reboot, Caesar (Andy Serkis), the genetically modified intelligent ape has founded a colony and a family in the forests outside of San Francisco.  His original owner (James Franco) is presumed dead from the deadly Simian Virus that has reduced mankind to small isolated survivor groups of the genetically immune.  The structure of the story is symmetrical - the apes and humans have to fashion a new society and decide how to engage with their enemy. In both camps we have the peaceful diplomats - wise Caesar and scientist Malcolm (Jason Clarke).  And in both camps we have the battle-scarred and distrustful war-mongerers - Koba (Toby Kebbell) and Dreyfus (Gary Oldman).

And yet, the script, from Mark Bomback (THE WOLVERINE), isn't as simple as that.  Koba can also be seen as a victim rather than an aggressor - brutally wounded by animal testing in a pivotal and emotionally charged scene where he shows Caesar the results of trusting humans.  And Dreyfus is doing what he believes is right to protect what is rest of humanity, having lost the family he evidently cares for deeply. They are both good people - ape and man - forced to terror by circumstance. And what of our heroes? The rather boring Malcolm is essentially good, if shown to be naive and mistaken.  And Caesar - ah this is where the movie gets truly subversive although I have seen precious little discussion of the ethics of his final act in the reviews and commentary I have read to date.

Indeed, it's at the textual level that the movie is most satisfying and provocative. I don't mean the dialogue - which is hackneyed - but in the ideas. One wonders if Mark Bomback was aware that Koba the Dread was Stalin's revolutionary nickname.  You can see Koba corrupting the utopian ape society founded by Caesar/Lenin as a metaphor.  And a powerful theme of the original book as well as this film is that of detente - can Caesar and Malcolm broker peace?

Alternatively you can draw an analogy to Lord of the Flies: another post WW2 dystopia. The schoolboys marooned on the island create a utopia that's ultimately corrupted by a coup d'état with Piggy as Blue Eyes. Indeed both have an Aslan style perfect leader who's killed and then resurrected, triumphing over evil: just as Caesar is killed and then brought back. The Christian imagery looms large until, as I said before, that final choice.

The other key reason to love this movie is the visual design - the eery menacing dark blues and greens of the oppressive forest and the decaying I AM LEGEND remains of San Francisco. Kudos especially to DP Michael Seresin (GRAVITY) and relief that Matt Reeves (CLOVERFIELD) kept his camera steady for that.

All of which is why I love this movie despite its hammy dialogue, heavy-handed politics, and actually offensive attitude toward women: healers, mothers and perpetually worried after their menfolk. Note how the Malcolm's son can only relate to/accept the doctor-girlfriend once he conceptualises her as a mother. Truly retrograde.

DAWN OF THE PLANET OF THE APES has a running time of 130 minutes and is rated PG-13 in the USA and 12A in the UK for moderate violence, threat, infrequent strong language.