QISSA: THE TALE OF A LONELY GHOST 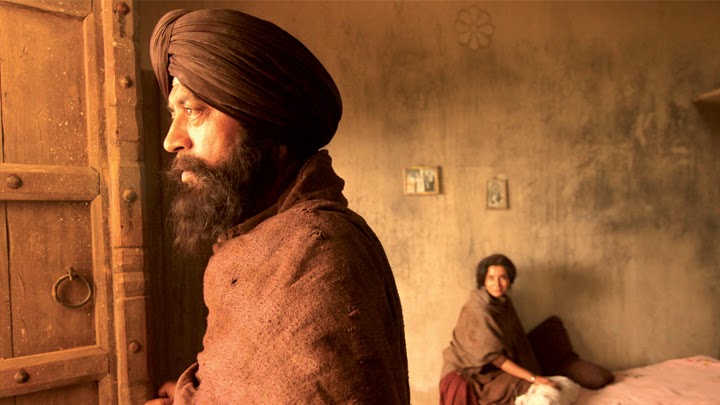 Anup Singh's fantastic historical fable (qissa means fable in English) is a tale of loss and madness that echoes in it's personal tragedies the wider political madness of Partition.  The separation of India and Pakistan in 1947 led to a traumatic upheaval as Sikhs and Hindus left the newly Pakistani northern Punjab and journeyed to the still India southern Punjab, while Muslims made the journey in reverse.  Torn from their homes, the refugees were victims of violence on both sides. Thus, early in the story we meet the Sikh patriarch Umber Singh (Irrfan Khan - LIFE OF PI) - so embittered that he literally poisons the well of his former home - an act which in the quiet unspoken fantastical film signals ill-omens. Four years later, when his wife gives birth to yet another daughter, he commits a momentary act of madness, welcoming the birth of his son and heir. Thus his daughter is brought up a a boy - a deceit that is tacitly condoned by father, mother and even family friend - and it's part of the subtle ambiguity of the film that even on her wedding day, we're not entirely sure how far the daughter realises she is in fact a girl.

For the first hour of the film it plays like a realistic and fearless portrayal of a deeply traumatised and misogynistic society where a father would commit a kind of double-think of desperation, and be so feared as to demand compliance from the mother (Tisca Chopra).  And when the son/daughter marries Neeli (Rasika Dugal) - a profoundly sympathetic character - we have the prospect of seeing a psychological exploration of how they cope with their love.  I was really looking forward to seeing actress Tillotama Shome depict the emotional breakdown of dealing with the realisation of what had happened to her/him.

But writer-director Anup Singh takes the film in a different direction - fantastical - and clearly signaled by the title of the film.  One can't really criticise the execution - after all this is exactly what he wanted to do - to create a world in which the profoundly real is matched up against gothic horror. The problem is that, for me, the plot twist denied us the most fascinating working out of the situation between the two married women, and almost felt like a jarring "jump the shark" moment, when I was jolted out of the film, and out of caring.

Still, there's much to enjoy here - great performances, the beautifully photography of Punjab by DP Sebastian Edschmid (THE LAST STATION), not to mention the successful and haunting evocation of abandoned homes and broken minds.