GOLTZIUS AND THE PELICAN COMPANY 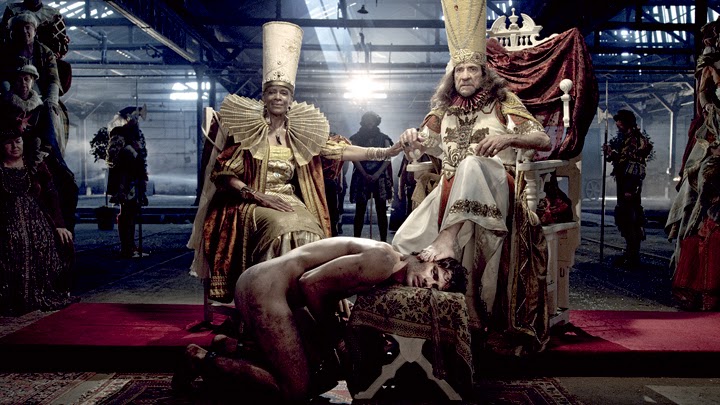 GOLTZIUS AND THE PELICAN COMPANY is a work of genius - a movie that is beautiful, inventive, provocative and mischievous - a work that could only have come from Peter Greenaway. It's a movie that begs to be seen on a big screen and yet has received a micro release in London: a movie made by a man who declares that cinema is dead, whose declining audiences seem to echo that fact - and yet who persists in creating these amazing virtuoso pieces of art.  It's just one of the many paradoxes encapsulated in the film.

The Goltzius of the title was a real life Dutch engraver, publisher and artist who lived at roughly the same time as Shakespeare.  At a time of intellectual ferment, the Baroque - when sensuous art came up against deeply-entrenched religious dogma which was already set against a rediscovery of the pre-Christian morality of the classics.  It was also a time of revolutionary technological change - when small scale canvas portraits and printed books brought art into the house for private contemplation. And, posits Peter Greenaway, all technological change is first used for smut!

So here we see the fictionalised Goltzius (Dutch artist Kees Kasander) travelling through Alsace and flattering the Margrave (F Murray Abraham in superb comic form) into commissioning the publication of an epic tome of explicit Biblical stories. And just to entice him further, he promises that his Pelican Company of publishers will put on theatrical version of each of the scenes at the Margrave's court. Thus we, as the Margrave, are treated to sexually explicit scenes of seduction and violence from the Old and New Testament.

The resulting film is lavish and inventive - a box of trickery set upon a revolving stage for our delight.  Greenaway plays with language and the human form with such dexterity as to demand repeat viewings.  But whether or not you enjoy the film may well depend on your willingness to tolerate his mischievous use of sex and nudity - his provocation that we too are pretend-prudish avid consumers of titillating material.  The Margrave proves censorious and the rather obvious point that  Greenaway makes is that society always will be. Still, no-one frames action and blends high art, theatrics, the written word and classical music quite like this.

The middle film of Greenaway's Dutch Masters, GOLTZIUS AND THE PELICAN COMPANY played the festival circuit in 2012 and was released in Russia last year. It was released earlier this year in France and Poland and is currently on super limited release in London.

The movie is rated 18 in the UK for strong sexualised nudity, sexual violence, very strong language and has a running time of 128 minutes.
Posted by Bina007 at 18:05