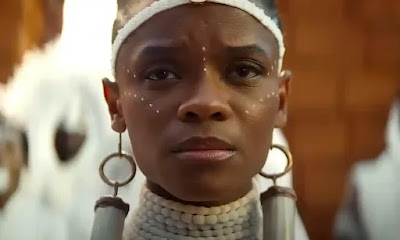 WAKANDA FOREVER is a film that is hobbled by its earnestly expressed grief for actor Chadwick Boseman, the T'Challa of its predecessor.  This memorialising is welcome in the early part of the film, and beautifully handled both in the Marvel opening credits and in the way iwriter-director Ryan Coogler incorporates the death of the character into its opening act.  But as we move into the film's second half, and another character dies, we realise that this movie is leaning into grief to a level that slows the pace, brings down the mood, and creates a rather mawkish and morbid end-product.

Nowhere is this more evident than in the character of Shuri, T'Challa's younger sister and science nerd.  As written by Coogler and played by Letitia Wright, Shuri spends the entire film crying and quiet. Even the final scene is of her burning mourning clothes. I feel we could have gotten to her decision to move forward and adopt the mantle of Black Panther half way through the excessively long run-time.

The claustrophobically negative atmosphere spreads to the B-plot which sees Tenoch Huerta introduced as the character Namur. He leads an underwater kingdom of mer-people who also have access to Vibranium.  Namur is pissed off that T'Challa took the decision to tell the world about its wonders and so put his own kingdom at risk of colonial exploitation from the Americans.

I really liked Huerta's performance and the design of this kingdom but the whole plot seemed weak as fuck.  He wants to ally with Wakanda against the imperials, but tells them if they don't ally with him he'll launch war on them.  Charming! So you end up with a massive battle between the two Vibranium super-powers with the real-world power of America left on the sidelines along with all of the American characters - Martin Freeman's CIA agent, his ex-wife - a wasted Julia Louis-Dreyfus who is now his boss, and Dominique Thorne as the MIT student who invented the vibranium detector.  The fact that the latter is squeezed out of screen-time is particularly sad, as it means the movie doesn't really explore the issue of the African-American versus African experience.

I also wonder how actual Africans feel about a film where lots of African-Americans are putting on a variety of accents and an African-American writer-director is creating a version of wise oracular Africa guided by its ancestors.  Not to mention the LGB community who must be looking at the almost embarrassed way the movie hints at a lesbian relationship between Danai Gurira's general and her sidekick played by Michaela Coel.  Somehow being so embarrassed about showing a proper kiss is even worse than not having any representation at all.

WAKANDA FOREVER has a running time of 161 minutes and is rated PG-13. It is on global release.