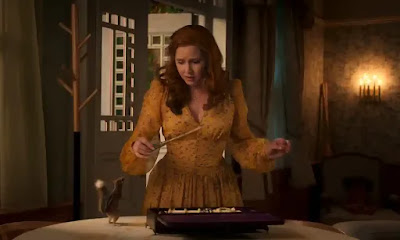 DISENCHANTED is a joyless, tuneless mess of a sequel that may well put Amy Adams' career to bed. Think about it: when was the last time she was the leading lady in an actual hit?  But the real issue here isn't anyone's performance (although to be sure, no-one looks like they're having a good time).  The real issue is a messy,  overly-complex script that doesn't seem to know what it wants the film to be about.
As the movie opens, we see our fairytale princess Giselle (Adams) now married to her Manhattan lawyer Robert (Patrick Dempsey).  They're both over-tired and stressed parenting a new baby daughter and a surly teenage Morgan (newcomer Gabriella Baldacchino). So, they move to suburbia and meet Maya Rudolph's Malvina - the oppressively perfect mean girl who seems to run the town. At this point we think the plot is going to be about Giselle coping with the reality after Happy Ever After, and dealing with a real-life villain.
But no. To add a needless complication and magical Macguffin we have King Edward (James Marsden) and Queen Nancy (Idina Menzel) turn up with a magic wand that Giselle uses to turn her town into a fairytale, and herself into a wicked stepmother.  This totally unanchors the plot, which is now about which mean girl will win. By the end, I think the point the movie is trying to make is that Morgan has to accept Giselle as her real mum.  But all that stuff about middle-aged and middle-class ennui seems to have been forgotten, and Malvina is presumably still harrumphing around the town scaring all in sight.
There was nothing charming or funny or wonderful about this film. It felt joyless and directionless and cheap. The quality of the songwriting was particularly disappointing. I am awarding it a sole star for the only decent and mischievous number - where Giselle and Malvina debate who is the most wicked. The rest is disposable.
DISENCHANTED is rated PG and has a running time. It is on release on Disney+.
Posted by Bina007 at 14:21