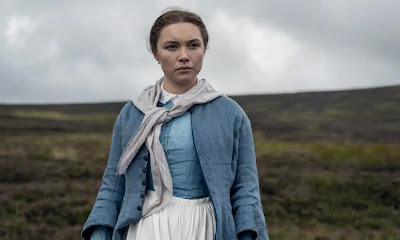 THE WONDER is one of the best movies I have seen this year: sublime cinematography and score; a breathtakingly good central performance from Florence Pugh; and a script that takes us deep into discussion with ourselves about the nature of faith and family. Kudos to director Sebastian Lelio - who seems to specialise in giving us films that interrogate and shine a light on complex female characters in tough situations - whether in GLORIA, A FANTASTIC WOMAN or DISOBEDIENCE - the latter also deeply concerned with the interactions of religious extremism and our physical experience.

The woman in question here is Florence Pugh's Libby - a Crimean War nurse and widow despatched to central Ireland to sit watch over an apparently miraculous young girl called Anna (Kila Lord Cassidy) who has sustained herself for months despite not eating.  People are already travelling from far and wide to observe this miracle, and Anna's demeanour is one of serene acceptance of her role. Her mother and father are deeply religious and resist Libby's common sense scientific injunctions to let the girl eat, even if by forced feeding.

Libby's ally in scepticism is the journalist William (Tom Burke). He bears the scars of earlier experience, just like Libby, and they find common cause against the insular town elders and priest (Toby Jones most notably and Ciaran Hinds).

It soon becomes clear that we are living in a world where the consuming or withholding of food is a weapon and a punishment and a martyrdom. This is an Ireland not far gone from the horrors of the Famine, which touched William's life particularly tragically.  We are also in an Ireland so doused in religion that fasting takes on meaning and martyrdom, and perhaps penance. Survival by merely eating is then relegated to the profane. Modern viewers cannot help but see prefigurement of further colonial injustices with the forced feeding of hunger strikers, and their modern day self-described martyrdom. And of course, where there is religious control we are now - sadly - conditioned to expect abuse.

The highest praise goes to Florence Pugh in a performance that is full of humanity but also resolute strength and intelligence.  I also loved the real-life mother daughter combination of Elaine and Kila Lord Cassidy. The former in particular is playing one of the most ambiguous and elusive roles as Anna's mother and I am still debating her motivations.

Behind the lens we must start with DP Ari Wegner (THE POWER OF THE DOG) who creates a film of oppressive interiors where the Dark Ages of religious belief feel as though they have been manifested in a house.  This contrasts with Libby and Will walking through open wild moors allowing us to breathe for a moment.  Then we have an excellent script - written by Alice Birch who also adapted Pugh's breakout film LADY MACBETH.  The screenplay is adapted from a book by Emma Donoghue, most famous for ROOM. It is so full of layered meaning and slipperiness that I am left in awe. Last but not least we must mention composer Matthew Herbert (A FANTASTIC WOMAN) with an eery, spectral score that gives the scrupulously period film an uncanny and anachronistic feeling that hints at the subject matter that transcends the era of the film.

THE WONDER is rated R and has a running time of 108 minutes. It played Telluride, Toronto and London 2022 and is now on release on Netflix.