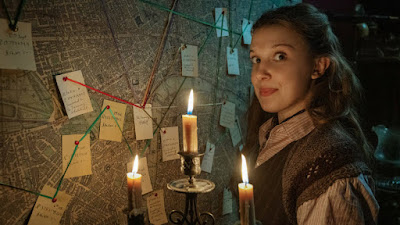 I was an enormous fan the original Enola Holmes film and I’m please to report that the sequel, reuniting most of the talent in front of and behind the lens, is just as smart and funny. It’s even more pleasing that the central murder-mystery is really well-constructed, and that the movie manages to incorporate its real history of the rise of the women’s labour movement with a light touch that is genuinely moving, rather than being crude or too on the nose.

The film opens with Enola (Millie Bobby Brown) struggling to find customers who take her detecting skills seriously. In desperation she takes the case of a missing match-girl which leads to the wider mystery of why so many of these factory workers are dying of typhus and why the profits at the factory have mysteriously rocketed. This brings Enola into the path of her famous elder brother Sherlock (Henry Cavill) whose case about corruption at the highest levels of government and industry is seemingly connected with Enola’s.

Along the way, we get to re-connect with Enola’s aristocratic love interest Lord Tewkesbury (Louis Partridge), the martial arts supremo Edith (Susan Wokoma) and of course the proto-feminist that is Enola’s mum (Helena Bonham Carter).  And of the new cast members, David Thewlis is particularly scene-chomping as the nasty policeman, Inspector Grail. We also get a marvellous cameo from Sharon Duncan-Brewster, who was so impressive as Liet-Kynes in the recent DUNE remake.

The resulting film is fast-paced and often Guy Ritchie-inspired in its kinetic fight scenes.  There’s plenty of fun and even some meta-comedy at the expense of the knowing fourth-wall breaking catchphrase “Tis I!”

The only character I can’t get my head around is Cavill’s Sherlock, playing against type because his character has far less action than the female characters. He mostly looks grave and concerned and doesn’t entirely convince in his early scene as a drunk.  It’s interesting to see that the writers have given him a sidekick - Dr Watson - in the final credits scene. Let’s see how Cavill does in a more conventional buddy-comedy role.

ENOLA HOLMES 2 has a running time of 129 minutes and is rated PG-13. It is released on Netflix today.