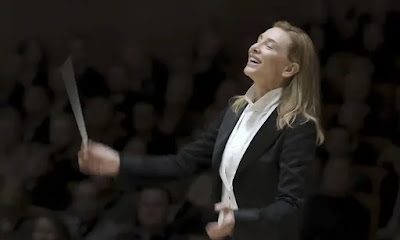 TAR is the obverse of SHE SAID: it is a film that has no interest in the alleged victims of sexual harassment or in those that seek to expose it.  Where SHE SAID denies the aggressor screen time and has no interest in his motivations, TAR puts the accused in every frame.  TAR is unabashedly interested in genius and the way in which it goes hand in hand with narcissism and the structures that enable that power to be abused.  TAR is a film that dares to be sophisticated and nuanced and provocative:  SHE SAID plays like a TV movie of the month with a pantomime villain and unequivocal heroines.  Maybe that’s the correct approach in the latter film because it deals with the real-life heinous crimes of Harvey Weinstein and the brave women who came forward and took him down. But it makes for a far less interesting film, sad to say.  Maybe TAR, creating a fictional and more ambitious story of abuse, can allow itself to be more slippery, and is therefore more fascinating and compelling.

The film stars Cate Blanchett in the performance of a lifetime of incredible performances. She plays the self-created worldwide star conductor Lydia Tar, currently in residence as the Berlin Phil and about to record the seminal Mahler 5.  She is leonine and masterful and imperious: striding on the world stage in her power suits.  When we meet her she is on stage being interviewed by real-life New Yorker editor Adam Gopnik, being feted for her skill. We see her artfully create the apparently artless cover art for her new recording.  She lives in luxury with her partner and adopted daughter. Her life seems infinitely curated to beauty and brilliance.

On the peripheral vision of our screen experience the cracks start to show.  Tar’s assistant and aspiring conductor (PARIS 13TH DISTRICT’s Noemie Merlant) reads emails sent from a frantic young woman - another aspiring conductor - who claims Tar tried to seduce her and then blocked her career. Who is the aggressor here? Tar claims the woman is a stalker and dismisses the messages so quickly you can almost forget they occurred, and get taken up again in the juggernaut of Tar’s professional ambition.

But then, later in the film, we see Tar cultivate a young cellist and deliberately bulldoze convention to create an amazing career opportunity for her.  Is this favouritism, sexual grooming, or just aggressive meritocracy and the bestowing of favour on an admittedly great talent? We are in ambiguity although for those who want to see it, patterns might be condemnatory.  When Tar dismisses an ageing, fading, deputy conductor, he tells her everyone knows what she does, and social media seems to confirm it.

The final act fall from grace is swift and merciless and perhaps deserved. The beauty of the film is that while we can see Tar’s flaws we also inwardly cheer at some of her politically incorrect victories.  When she censoriously destroys a young conservatoire student who casually dismisses Bach as a misogynist, viewers of my generation and mindset cheer for a champion of the dead white male Canon and not imposing anachronistic demands of their regressive values. Similarly, what parent doesn’t wish she could scare the shit out of a schoolyard bully?

Yes, reader, I must admit that I am indeed Team Tar and to see her, a woman who controlled time, reduced to conducting against a time-track, was rather depressing to me. The triumph of mediocrity and the cancelling and constraining of genius. This is, I think rather the point of the film.  That of course one must punish abuse, but is cancelling really justice?  Should we not prosecute according to law and not on social media?  Tar was certainly guilty of being an egomania. What great conductor isn’t? But is she guilty of harassment as charged?  We will never know.

TAR is rated R and has a running time of 158 minutes. It played Venice, Telluride and Toronto 2022. It was released in the USA last month and goes on release in the UK on January 20th.