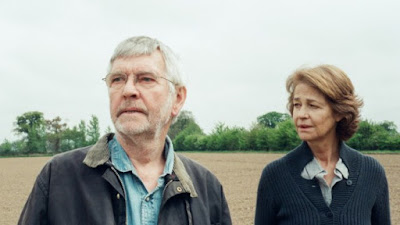 Andrew Haigh (WEEKEND) returns to our screens with another deeply affecting, beautifully directed character drama.  45 YEARS stars Charlotte Rampling and Tom Courtenay as an apparently happily married couple approaching their 45th wedding anniversary when a letter is delivered reporting the discovery of the frozen body of the husband's former girlfriend, Katya.  Although she died before the couple even met, his references to "my Katya", the fact that they pretended to be married, the way it has affected him, all deeply affect his wife.  The husband disappears into the attic to look at old letters and play old records and even smell old perfume. And the formerly trusting, loving wife becomes distrustful and insecure - checking up on him, changing from a perfectly understanding reasonable woman into someone unwilling to even hear the other woman's name.

What I love about the script is that you feel sympathy with both characters even as they do things that are unsympathetic or self-involved. These are two real people, with all their faults and strengths, facing up to emotions long forgotten and long suppressed.  As we see the wife become sneaky and cold, her position is utterly understandable. As she demands a public show of loyalty at their anniversary party, and we see her husband almost child-like in his desire to please her, we still understand both sides.  The tragedy is shared and irrevocable, as summed up in the most haunting close up on Rampling's face that closes the film.

This is film-making at its most raw and elegant - the melancholy blue-gray misty Norfolk landscape a perfect backdrop for the melancholy regret.  It's a film that contains no grand emotional break-downs but is absolutely paralysing in its depiction of mis-trust.  Andrew Haigh has established himself as one of the most assured directors of actors and I can't wait to see what he does next.

45 YEARS has a running time of 95 minutes and is rated  15 for strong language and sex. The movie played Berlin 2015 where Charlotte Rampling and Tom Courtenay won the Silver Bear.  It opened earlier this year in Estonia and is currently on release in the UK, Ireland and Slovenia. It opens in Germany on September 10th, in Denmark on October 8th, in France on November 4th, in Sweden on December 4th and in Greece on December 10th.
Posted by Bina007 at 13:22