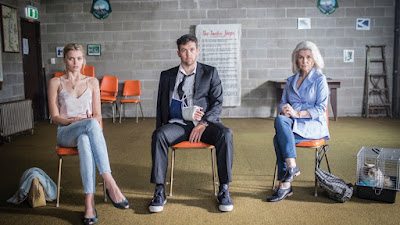 Aussie writer-director-actor Brendan Cowell (SAVE YOUR LEGS!) returns to the BFI London Festival with his black comedy-drama RUBEN GUTHRIE about an ad exec battling with alcoholism in the face of workplace peer pressure and an unsupportive family.  As the movie opens, he gets tanked and falls into a swimming pool, breaking his arm, and losing his fiance unless he can get sober for a year. This prompts panic in those around him. His best friend thinks he'll be no fun. His boss thinks he'll lose his ad-skills and dangles a younger social media hipster as competitive pressure.  His dad thinks he should just man up.  And in a typically pithy exchange, when Ruben tells his mum that he's taking it one day at a time, she responds "that doesn't seem very ambitious".   Despite all the surrounding nastiness, Ruben remains a spiky and not totally likeable character, and I love that Patrick Brammall plays him as half charming and half repellent. He evidently shacked up with his fiancee when she was underage and sleeps with his vulnerable AA sponsor almost as a distraction.  That said, apparently those who know say the original stage play, also written by Cowell, was far darker and nastier, with Guthrie far less sympathetic.

I really love the tone of this film.  I love the fact that it's willing to explore some messed up, nasty stuff and often with a sense of humour. I like the fact that even as Ruben Guthrie starts to sober up he retains his nasty edge.  We need more films that are willing to play with boundaries like that.

RUBEN GUTHRIE played the Sydney Film Festival 2015 and will play the BFI London Film Festival.  At the time of writing there are still tickets available for both screenings. It was released in Australia in July.
Posted by Bina007 at 07:59