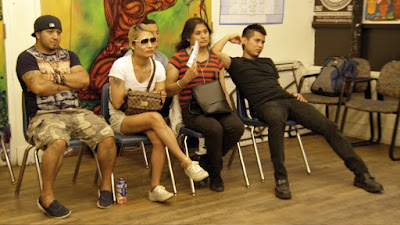 Frederick Wiseman (AT BERKELEY, NATIONAL GALLERY) specialises in meticulously filmed, kaleidoscopic documentaries that give us a languorous, immersive slice of life. In his latest film to play the London Film Festival he returns with an over-three-hour look at life in the ethnically diverse Queens neighbourhood, Jackson Heights.  Without overtly editorialising or inserting himself into the picture, Wiseman creates a picture of a place that is filled with passionate, diverse people struggling to make a life for themselves. This stretches from new immigrants taking classes to gain citizenship to small business owners struggling with new regulations to minority group lobbying for their rights.  I got the feeling that I was witnessing politics - real politics - played out at the micro level - where it really matters.  The politics of who gets to parade, who gets to protest, who gets to become an American.  In doing so, we hear lots of fantastic street music, and meet lots of fascinating people. People who have put into their community for years and keep on keepin' on.  It's strange when an everyday tale of everyday people - because of the skill of the person alighting on the details of their lives - can be transformed into something lyrical and epic. But in this portrait of a community - a very real community in defiance of all those who believe such things don't exist - there's a kind of epic importance.  This is social documentary film at its very finest. And as the slow march of gentrification rolls in from Brooklyn, it's all the more important.

IN JACKSON HEIGHTS has a running time of 190 minutes.  The film played Venice and Toronto 2015 and will play the BFI London Film Festival 2015 where it is nominated for the Grierson Award. Although both screenings are sold out there are usually stand-by tickets available.  It will be released on November 4th in the USA.