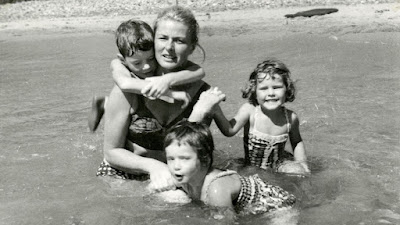 For anyone with even a passing interest in cinema the story of Ingrid Bergman is well known. The iconic actress from CASABLANCA came from a theatre background in Sweden to fame in Hollywood but at the height of it all was ostracised for leaving her husband and child for Roberto Rossellini.  Re-inventing herself as a European arthouse actress she was a forceful advocate for freedom from societal judgment and the quality of her work meant that the opportunities found her, even in exile.

What's different about this documentary is that director Stig Bjorkman has managed to get such amazing access to Bergman's letters, home videos and photographs. Most of all, he has access to all  her children.  And so while this is "just" another linear re-telling of an extra-ordinary life, what you're actually getting is Ingrid speaking to her best friends in real letters, or the interpretation of her children and their interpretation of her life.  Moreover, the focus here really is on her life rather than the films.

The result is a moving story of a girl who lost her father and mother young and for whom maybe the message was, don't take life for granted, live every moment.   She left Sweden for Germany and then America and fell in love with a doctor and had a daughter but was working on the other side of the continent. She then had another "Italian" family but they too missed her during filming or plays.  At one point in the documentary one of her children asks "why couldn't she live with any of us?"  Bergman herself argues that it had advantages - she was a friend rather than a nagging mum - and Isabella Rossellini argues that she would've just been bored had she stayed home. But I suspect it was tougher than that. And, after all, one shouldn't have to get scoliosis to get time with one's mum.

Still, I'm falling into that trap of being judgmental and if Bergman stands for anything it is for an artist's right to be judged on his or her work and not for their private choices.  They are nobody's business.   But how fascinating to be given a glimpse behind the curtain, in her own words, to see her own courage, the appreciation her children have for that, even as they acknowledge its difficulties.

INGRID BERGMAN: IN HER OWN WORDS has a running time of 114 minutes.  The movie played Cannes 2015 where it Won the Golden Eye - Special Mention. It will play the BFI London Film Festival where tickets are available for both screenings at the time of writing. It was released earlier this year in Denmark, Norway, Sweden, Germany, France and Finland. It opens on October 15th in South Korea and on November 13th in the USA.
Posted by Bina007 at 16:05