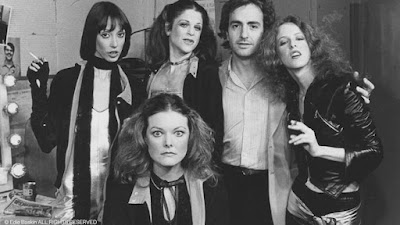 LIVE FROM NEW YORK! is the directorial debut of Bao Nguyen, chronicling the history of the iconic comedy skit-show Saturday Night Live. He does so in 80 minutes so it would be easy to put this film's superficiality down to its brief run-time but I suspect it has more to do with the director having bought Lorne Michael's kool-aid, wanting to diminish the non-Lorne years and not having the guts to seriously interrogate the charges of institutionalised sexism and racism. And I don't by that "where was the black Friend" argument.  SNL was meant to be different - cutting edge radical. This is what skewers the director's use of hyperbolic opening music - Gil Scott Heron's The Revolution Will Not Be Televised - this may have been true in the 70s and 80s but for the past fifteen years it feels as though the cutting edge of radical satire has lived on South Park or The Daily Show. Let's be honest, isn't SNL mostly harmless by now? Isn't everything that Julia Louis-Dreyfus says about the 80s true now, where SNL was desperately trying to keep pace with pop culture rather than setting the pace?

Anyways, this isn't meant to be a review of SNL but a review of a documentary about it. But when the documentary takes its part so uncritically it's easy to slip between the two.  So let me say that for fans of SNL, there's probably good content here for you. But for anyone else just looking for the iconic clips of Chevy Chase as Gerald Ford or Sarah Palin as Tina Fey, that's what youtube compilations were made for.

LIVE FROM NEW YORK! has a running time of 90 minutes. The movie played Tribeca 2015 and will also play the BFI London Film Festival. At the time of writing, there are tickets available for both screenings.  It will be aired on NBC on October 3rd.
Posted by Bina007 at 18:58