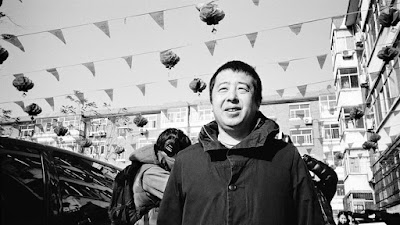 The premise of this documentary is simple. Director Walter Salles (THE MOTORCYCLE DIARIES) spends time with his friend and documentarian Jia Zhang-Ke.  They walk through the streets of his home town, Fenyang, in northern China, and talk about how life has changed, the old days at film school and his interests and passions. This is juxtaposed with interviews with Jia's family, friends and colleagues and interspersed with clips from his films. The small moments are hilarious. When a fan and student asks to take a photo with Jia and he can't help direct him not to shoot against the light! And all the way through there's great humour mixed in with the melancholy - Jia pointing out that his childhood home used to be a prison, and lamenting the death of the seedy independent karaoke bar.


To be sure, the real joy of this film is for fans of the director's work, as many of the rambling walks take place through scenes from his movies.  But if you haven't experienced Jia's work, the clips certainly give you an appetiser. Furthermore, the film has a wider relevance. After all, how many of us in the West get to see what life is really life in China, especially beyond the gateway cities?  And yet here we have Walter Salles shooting real people in a real city from the bottom up - capturing anonymous streets and ordinary people.  Far from the shiny skyscrapers of Shanghai and the carefully curated images of the Olympics we experience a hollowed-out city, where the people have left for jobs on the coast.  So from that point of view, this film works just as well as a social document of China at a certain point in her development. This is nowhere more important that in Jia's dealings with the Chinese censors - an insight into how far modernisation has been contained to the economic realm - and in the experience of his father during the Cultural Revolution.  But again and again it crops up - not least in the prudish politicians attitudes to the decadent karaoke bars! Finally, insofar as Salles doesn't force any parallels or insights from his own career onto this film, it's a modest and self-effacing affair.

JIA ZHANG-KE, A GUY FROM FENYANG has a running time of 98 minutes. The movie is in competition for the Grierson Award at the BFI London Film Festival 2015. At the time of writing tickets are still available for both screenings.
Posted by Bina007 at 14:44