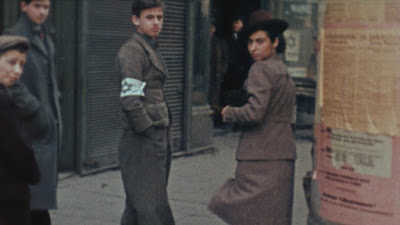 David Evans' documentary is the most affecting I have seen in the festival previews to date.  It is devastating in its simplicity of concept and relentlessness of investigation. The narrator and key protagonist is Phillipe Sands, a famous human rights lawyer based in the UK who, in turns out, had family killed in the Holocaust and a grandfather who survived but was understandably reluctant to speak about his experiences. The power of the documentary is that is chronicles Sand's encounter with two sons of high ranking Nazi officials. The first, Niklas Frank, whose father Hans ran the General Government in Poland, has fully embraced his father's past to the point where he is almost obsessed with how much he despises him.  The second, Horst von Waechter, whose father was the Governor of Krakow and Galicia, steadfastly refuses to accept any evidence that his father had command responsibility for the mass murder of Jews, and welcomes anyone who will speak of him as a decent man, even if that man is wearing a swastika.


The documentary sees these three men grappling with the events of World War Two  as they journey from Austria into Poland to the key sites of the Holocaust:  the council chamber where Frank gave the order for mass murder to Waechter, among others;  the synagogue where Sands' family worshipped until Waechter gave the order to destroy it; the route of the forced march to a field where Sands family was shot.

Through all of this we are faced with two men trying desperately to have a third man admit - crucially - not his own guilt - but to accept what his father did.  That man's willingness to believe the best of his father is both frustrating and sympathetic.  Who in his shoes would be able to face such crimes?  At one point I became very uncomfortable with just how far Sands and Frank were pushing him, but then, I suppose there is an urgency to prevent - not so much Holocaust denial - as denial of responsibility - wherever we find it, no matter how close and personal.

MY NAZI LEGACY AKA A NAZI LEGACY: WHAT OUR FATHER'S DID played the Tribeca Film Festival and will play the BFI London Film Festival. It has a running time of 92 minutes.  There are still tickets available for both screenings at LFF.  It will be released in the USA on November 6th.
Posted by Bina007 at 06:39