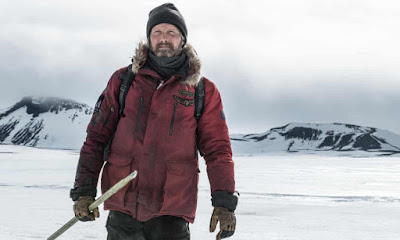 Mads Mikkelsen is absolutely gripping as the protagonist in debut feature director Joe Penna's austere and impressive ARCTIC. This lean film begins in media res, with a downed pilot hunting for fish and eking out at existence in his crashed plane. The pilot seems capable and self-reliant but all the same one wonders at his mental rather than physical health.   The pilot's hand is forced when another plane crashes and its horrifically wounded pilot clearly cannot survive without proper medical health.  And so he makes the heroic decision to drag her to the coast and hopefully rescue, through extreme cold, over crevasses, in the path of a polar bear, and at great risk to his own survival.  Through it all we get the same moral quandaries thrown up for real in Kevin MacDonald's superb doc TOUCHING THE VOID.  Should Mikkelsen's character abandon the injured woman to save himself? How much of a risk is worth taking to survive? Do you risk everything to maybe be seen?

The film stands on Mikkelsen's deeply humane performance and the beautiful cinematography from DP Tomas Orn Tomasson shot on location in Iceland.  We also get a beautiful score by Joseph Trapanese (THE GREATEST SHOWMAN) - utterly essential in a film where the characters barely speak.  The result is an austere film that nonetheless is deeply moving and provocative. At once full of almost impossible questions and the majesty of nature but also deeply personal.