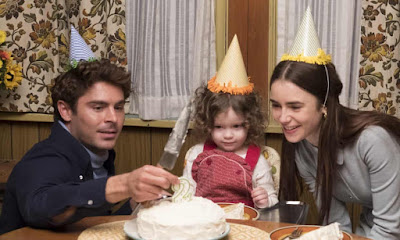 Zac Efron is absolutely perfect as US serial killer Ted Bundy - a man who appeared kinda ordinary looking on photos but whom so many women described as charismatic and handsome. That charisma and handsomeness lured them into a false sense of comfort, and at least 30, to death and dismemberment.  Not that we see much of that in a film that is superb in its period detail and at showing the charming side of Bundy, but shies away from showing what the judge in this case calls his utter lack of humanity. The result is a lopsided film that does a disservice to his victims and (of course, this matters far far far less) to the audience.  Yes, we DO need to see his charm, but we also need to see the horror. Perhaps the problem is that the film is based on the memoirs of his fiancée, so she wouldn't have known that stuff, but my goodness, the director Joe Berlinger sure does having directed the multi-part Netflix doc on Bundy. So why not work with Michael Werwie, the adaptor of those memoirs, to show the parallel story of Bundy's interiority.  Otherwise, the movie as it stands, feels odd, and the final scene confrontation between Bundy and his long-time fiancee feels unearned and fake. Similarly, director Berlinger could easily have contrasted the sunny, warm-toned courtroom scenes, presided over by an avuncular and wry John Malkovich with a more gritty, nasty reality - a reality that contrasts with and interrogates Bundy's psychopathic charm.  Sadly, all we're left with are some good performances in a misguided film.

EXTREMELY WICKED, SHOCKINGLY EVIL AND VILE has a running time of 110 minutes and is rated R in the USA and 15 in the UK. It is on release in Netflix worldwide except the UK where it is available on Sky Cinema On Demand and in cinemas.  It played Sundance and Tribeca 2019.
Posted by Bina007 at 08:19