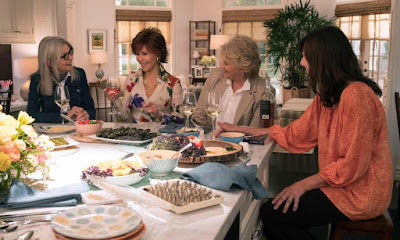 Bill Holderman's directorial debut and Erin Simms screenwriting debut comprises a rather gentle but pleasant rom-com aimed at the sixty-something market.   The conceit is that four long-time friends have a regular bookclub, and reading Fifty Shades of Grey re-awakens their interest in sex, dating and love.  Diane Keaton plays a people-pleasing grandma being bullied by her patronising kids into moving closer to them and away from her friends, not to mention a potential new love interest played by the still hot Andy Garcia.  Mary Steenburgen plays a married woman desperate to re-inject some sex into her otherwise happy marriage.  Candice Bergen takes the leap into online dating despite the knock to her self-esteem from her ex's twenty-something new fiancee. And Jane Fonda plays a successful businesswoman who finally allows herself to admit that she needs love in the form of Don Johnson.

It turns out that the issues plaguing sixty-something women are not that different from those affecting their younger counterparts - the inability to be vulnerable, balancing work and relationships, getting over an ex, getting over low self-esteem. As a result this movie was actually more relatable than I'd thought.  Moreover, from what I've seen from friends parents, their is an alarming tendency to co-opt one's parents lives and assume that they have nothing going on - and a need for the grandparents to reclaim their independence.

The downside is that it also turns out that a sixty-something rom-com has also the same genre cliches as a twenty-something one - the meet cutes, the final act reconciliations.  But I feel that if you take this film for what it is, you'll enjoy the ride.