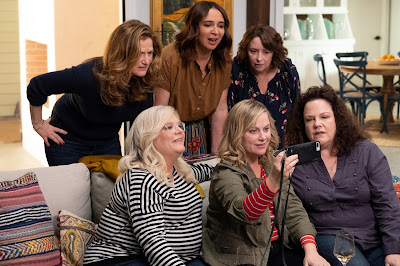 What an absolute shame! With so much female talent in front of and behind the lens, I was expecting great things from Amy Poehler's directorial debut. But sadly, her story of a bunch of middle-aged women taking a holiday in Napa is dull and humourless, despite a script penned by, and many actresses from, the SNL stable. Poehler stars as the highly strung organiser of the weekend break in a beautiful house owned by Tina Fey's weirdly unemotional owner.  Both she and the ladies' husbands warn that the girls are bound to fall out and - in a sadly predictable and gender-stereotypical way - they do.  So while we get some moments of drunken bonding we also get plenty of passive-aggressive quibbling.  It all reaches its nadir when drunken Maya Rudolph sings in a wine bar and when poor Jason Schwartzman is forced to play a thinly written earnest chef cum driver.  There's really nothing new original or funny here.  Frankly, if you want to watch authentic, funny and moving depictions of female friendship you'd be better off watching the superb adult animated comedy TUCA AND BERTIE, also released on Netflix this weekend.