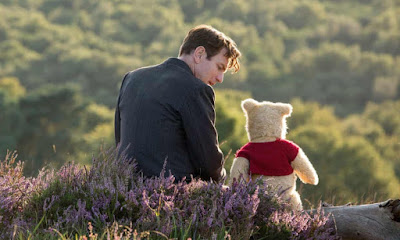 CHRISTOPHER ROBIN comes to our screens with an impeccable pedigree.  It's director, Marc Forster, has previously explored the inner lives of iconic British children's authors with FINDING NEVERLAND. And its screenwriters have both written and directed award-winning films - whether Alex Ross Perry with HER SMELL or Tom McCarthy with SPOTLIGHT.  It also stars three charismatic British actors - Ewan McGregor as Christopher Robin; Hayley Atwell as his wife; and Mark Gatiss as his venal boss.  And the animation is really lovely - the characters of Winnie The Pooh are fluffy and cuddly and voiced by actors that truly bring them to life!

And yet, despite all this, the movie just fails to spark interest or emotion.  Maybe its because the opening scenes of a work-worn middle-aged Christopher Robin take so long to establish. Maybe it's because we only see Christopher returning Pooh to the Hundred Acre Wood and having fun with all his childhood friends about an hour in. Maybe it's because even when his daughter meets the animals there still doesn't seem to be any real sense of joy in the film.  And without that, all we really have is a rehash of the story of MARY POPPINS. So, sadly, this is one to avoid.

CHRISTOPHER ROBIN is rated PG and has a running time of 107 minutes.  It is now available to rent and own.
Posted by Bina007 at 16:42