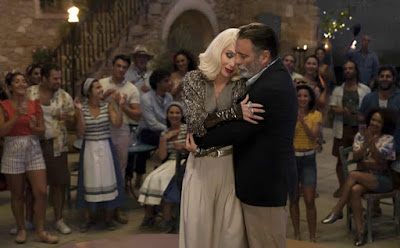 Catching up on a few releases I missed last year and the first is MAMMA MIA! 2, the inevitable follow up to the phenomenally commercially successful ABBA jukebox musical turned movie. I must confess to a lot of fondness to the original with its top tier hits, performed with elan by the elder cast members - notably a very campy Meryl Streep, always superb Christine Baranski and Julie Walters.  The added surprise was that Amanda Seyfried, playing the young girl wondering which of her mother's one night stands was her real father - had a superb singing voice. It would take a cynic indeed to resist the original movie's charm.

Sadly the sequel doesn't quite live up to the original's infectious joy. Partly that's because a lot of the best songs have already been used up - so that the occasional hits seen here are diluted with some B grade material.  Partly it's because Lily James, playing the young Streep, just doesn't have a strong singing voice to compete with Seyfried - and neither competes with a last minute cameo from Cher as their mum/grandma.  Partly it's because all the young actors in the flashback scenes to Meryl Streep's wild years have to do impersonations of how their elderly versions would act and it's hugely constraining. So we have Lily James not acting as her character but impersonating Streep's exaggerated somewhat awkward dancing - and we have all three young men impersonating Firth, Skarsgard and Brosnan from the original film.  Of the three Harry Skinner does the best as Young Harry, perfectly imitating Firth's stilted delivery.  But a few fun impersonations and a stellar Cher cameo do not a movie make. You'd be better off the just watching the end credit performance of Super Trouper on youtube.