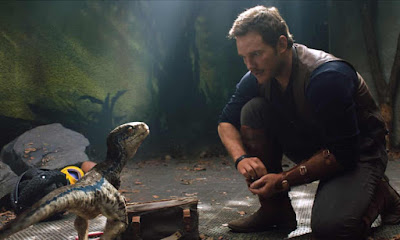 This film is utterly without merit, joy, wonder or intelligence  It is a shameless cash-in on a tired franchise, without any of the majesty of the original.  Even worse, it teases us with memories of that film with an early cameo from Jeff Goldblum and a late cameo from BD Wong. Worst of all, it wastes the talents of arthouse director J A Bayona, who made the exceptional A MONSTER CALLS.

In this new instalment, a few years after the dinos go bonkers on Isla Nubar, a volcano threatens to make them all extinct again. Goldblum's rational scientist argues for this but reformed park exec Bryce Dallas Howard now wants to rescue them as living creatures deserving of our help. In doing so she enlists the help of ex-lover and dino handler Chris Pratt, and is funded by James Cromwell's dying billionaire and ex partner of the park's original founder.  Of course, the moral of this series was always that the real monsters weren't the killer dinos but the evil capitalist bastards who sought to exploit them. And so it goes with this non-surprising plot-twist.

The whole thing is over-loud, over-long, emotionally involving and lacking in intelligence. Avoid.