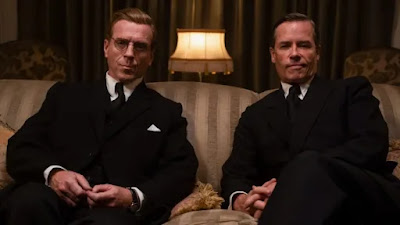 The first two episodes of Nick Murphy's adaptation of Ben MacIntyre's A SPY AMONG FRIENDS were screened as part of the BFI London Film Festival last night. It's hard to judge the direction of a miniseries on two episodes alone, but so far it comes across as cleverly constructed, beautifully acted and largely faithful to Macintyre's scrupulously researched book.

The book investigates the "mystery" of why the British intelligence service apparently let Philby - finally exposed as a Soviet spy - escape to Moscow in 1963, rather than bringing him in to face charges of treason.  The common answer, and one I share, is that there is no great conspiracy or mystery at all. As with Burgess and Maclean, it was far less embarassing to the SIS and the British Establishment to have Philby fuck off behind the Iron Curtain to pretty much silence in the western press, rather than to stand trial and expose just how lax security vetting was, and just how far Philby had "pulled the Circus inside out" for decades on the basis that no decent chap who went to a private school could ever be a wrongun'.

Still, TV demands drama, so this miniseries posits that a man as clever as Nicholas Elliott - who volunteered to go to Beirut to bring Philby in - would not have let him escape without getting something in return. And this is pretty much the state of play when we leave episode 2.

Guy Pierce seems to nail something of Kim Philby's notoriously mis-used charisma, arrogance and ruthlessness.  Despite his latter day alcoholism, there's a superb scene when the Soviet spy is on a train to Moscow and for a moment - just a moment - when he tells his handler how he murdered a Soviet defector who would have blown his cover in 1951 and reminds said handler not to patronise him - it's just pure ruthless muderous condescension. This is the heart of Philby's egomania.  I believe he became a spy out of ideological idealism, but stayed a spy because he got a kick out of being the smartest person in the room at any time.  It suited his vanity.

Damian Lewis is rather harder to pin down as Nick Elliott and that's probably the point. One understands how Elliott believes in his best friend right up until the point when Burgess and Maclean defect in 1951. But from then on, when it has been categorically proven that "one of us" can be a wrongun', why does someone as intelligent as Elliott remain loyal and credulous - even getting Philby his job in Beirut? Friendship?  Believing he might - like Blunt - just stop? Or trying to get him out of the way? I am looking forward to seeing what the miniseries does with this but so far - nada.

The final lead actor in this production is Anna Maxwell Martin as the fictional character of Lilly - an MI5 interrogator who debriefs Elliott on his return from Beirut, and provides the framing device for the show.  I know why the writers felt the need to create Lilly. And to beef up the role of Flora Solomon, the real woman who shopped Philby, and Litzy Friedmann, Philby's first wife.  They want to let some women into what is basically an all-male story because frankly that's how the Establishment operated at the time, and this is nothing if not a story about a failure at the heart of the Establishment.

Maxwell Martin is brilliant as always and her character does well to show the rivalry and class antagonism between MI5 and the SIS - security versus intelligence - working class strivers vs the effete adventurers of the upper classes.  I really liked her character. But when the writers make her married to a black doctor you just think okay is this telling us something about Lilly or about appealing to contemporary audiences? I say this as a person of colour - don't add us as bit parts to make a point - give us proper characters that propel action if you must anachronistically include us. That said, I appreciate the earnest good intentions. So let's move on.

The only thing that really worried me was that they seem to be hyping up the role of Litzi Friedmann as not just an instigator of Philby's move to spying but also as someone who kept him there, actively, after the war. Not sure where they are taking this but it just makes me nervous that they're going to go off piste from the facts to make a female character more important.

Finally, it's worth mentioning that other than the great performances I also really love that this show has decided to make post-war Britain look as poor and grey and grimy as it was.  This is the real world of espionage as depicted by Le Carre rather than the glamour and glitz of Fleming. The lensing and lighting and production and costume design are all punching well above the weight of a TV show. And the delicate use of make-up and CGI to age down and then age up the lead actors is first rate.

A SPY AMONG FRIENDS will be streaming on ITVx later this year.