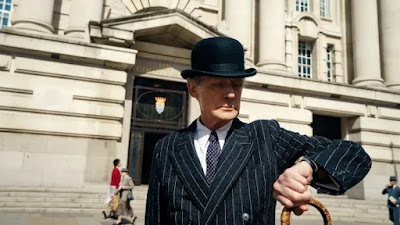 LIVING is a delicate, quiet, deeply affecting and faithful adaptation of Kurosawa's 1950s film Ikiru, brought to the screen by screenwriter Kazuo Ishiguro and director Oliver Hermanus.  How ironic that a Japanese-British writer and South African director should make a film that so piercingly investigates what it is to be that most English of things - an elderly, middle-class civil servant - an English "gentleman" of a certain period - perhaps epitomised by our late Queen - of English decline, of the stiff upper lip, of just getting on with it and not causing a fuss.  Then again, one could argue that this kind of investigation has been at the heart of Ishiguro's stunning oeuvre from the start, and what better writer to take an iconic Japanese film and inject it with Englishness.
Bill Nighy gives the performance of his career - the kind of award-worthy performance that makes you wonder why he wasn't offered more challenging dramatic roles decades ago - as the stiff, near silent civil servant whose entire job seems to be blocking action in a Kafka-esque byzantine bureaucracy. As Mr Williams shuffles another manilla folder into a pile on his desk his guiding principle seems to be that "it can do no harm" to rest there for a few more weeks.
The news that Mr Williams has mere months to live jolts him into self-reflection. He attempts a seaside jaunt to live it up, being guided with care by Tom Burke's roué. But this seems out of character and tacked on. The real enlivenment comes from his relationship with a young former colleague played by SEX EDUCATION's Aimee Lou Wood in a break-out role of real warmth, honesty and gentle humour. Mr Williams envies her vitality, and unable to communicate with his son, as much of a procrastinator as his father, he confides in her, and finds the inspiration to now make what small difference he can - to actually do his job by shepherding the building of a children's playground.
The resulting film is tender, beautifully observed and shown with quite some directorial flair.  As with the best drama, it's all about what isn't said, and the pauses between the words.  There's also some excellent, dryly comic set piece passive-aggression when Mr Williams turns the bureaucracy on its head by effectively sitting and making people feel awkward. Credit to Oliver Hermanus and his team for beautifully capturing the look and feel of post-war London - not least Sandy Powell's costumes. There's real panache in the way Hermanus depicts the seaside episode in particular, set to music, with little dialogue but everything expressed in glances and responses.  This is very fine film-making indeed.
LIVING has a running time of 102 minutes and is rated PG-13. The film has played Sundance, Telluride, Venice, San Sebastian,Toronto and the BFI London Film Festival. It will be released in the UK on November 4th and in the USA on December 23rd.
Posted by Bina007 at 09:12