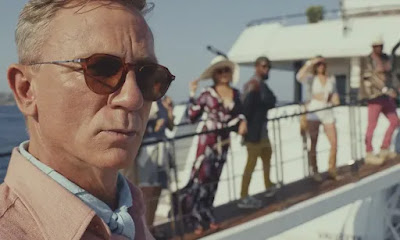 I was not the world's biggest fan of KNIVES OUT - Rian Johnson's closed-house murder-mystery starring Daniel Craig as the detective with the broad southern drawl. I sat stony silent in a packed London Film Festival screening with the rest of the audience having the time of their life.  I thought the mystery wasn't complex or interesting and the performances fell flat for me. I just didn't get it. As a result, I had zero expectations for its high-budget sequel, GLASS ONION, and was cringing at the thought of its two-hour twenty minutes running time.
Well reader, I can happily report that GLASS ONION is one of my favourite movies of the year!  It flew by its running time in a haze of laugh-out loud comedy; brilliantly-acted outlandish characters; and a proper mystery that's both tricksy, meta-textual and politically biting!
The movie stars Daniel Craig, once again returning as Benoit Blanc, and leaning even further into the camp of a fussily over-dressed and anachronistic famous detective in the Agatha Christie style. The new villain of the piece is Ed Norton's tech billionaire Miles Bron, clearly based on Elon Musk. He's a vainglorious fake-hippie who invites all of his old college friends to a yearly retreat, this time on his supervillain island lair.  As the movie unfolds, in good detective tradition, we realise that each of the characters needs Miles for his money or connections and has a motive to kill him. There's even a MacGuffin - a piece of a new renewable energy-producing crystal widget that is also - oh no! - rather dangerous!
The heart of the piece - or maybe its moral compass in a sea of characters that are more or less self-interested and despicable - is Janelle Monae's Andi Brand.  As the movie unfolds we discover that Andi was in fact the brains behind Miles' big invention and they haven't really spoken in years. So why has she shown up on the island? And who invited Benoit?
The first half of the movie explores the connections between the characters and leads us to the murder. The second half of the film goes back and reveals what was really happening. This might sound tedious but it's so damn clever, smart and involving I promise you it won't feel like a rehash. But I can't tell you exactly why it works for fear of spoiling the plot - so I'll just encourage you to watch.
GLASS ONION: A KNIVES OUT MYSTERY is rated PG-13 and has a running time of 139 minutes. It played Toronto 2022 and will be released on Netflix on December 23rd.
Posted by Bina007 at 10:37