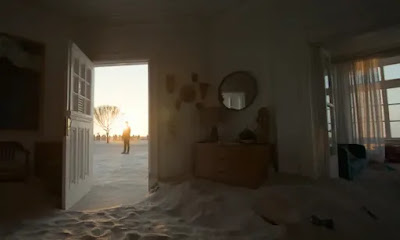 What a pile of narcissistic pretentious wank this film is! And what a waste of talent! What a waste of Inarritu and Khondji's kinetic, fluid camerawork and mastery of cinema! What a waste of a chance to truly explore the relationship of celebrity to art, and of Mexico to America!
It must be said that I have never been a fan of these sorts of masturbatory solipstic films about film-making. Everything that needed to be said about this was said by Fellini in 8 1/2 and even that film strains at my sympathy. But with BARDO, Inarritu has truly gone through the looking glass.
The film opens with a visually ravishing and playful scene of an unseen man - presumably the director's avatar Silverio Gama (Daniel Gimenez Cacho) taking massive leaps over the Mmexican desert. It had a fantastical feel similar to BIRDMAN and I thought, okay, this is going to be fun!
We then transition into a scene where the director is now waiting for his wife to give birth, but apparently the baby decides the world is too fucked up and instructs the doctor to pop him back in. This we see. It's surreal, darkly comic, and I was still thinking, okay, this is going to be fun!
But we then move into the main body of the film which sees the director move through contemporary Mexico in preparation for a high profile American award. He seems disengaged and childishly refuses to co-operate with the people preparing him for the ceremony. He has a fractious relationship with his son who has been raised largely in America. And he has a fractious relationship with his homeland, which he sees as being conquered again, but this time economically rather than militarily.
It all meanders along with surreal scenes interspersed with banal family drama. At one point his wife is running around the flat, tits out, for no apparent reason, and Inarritu delights in showing us the aforementioned baby hanging out of her for no reason other than to provoke? It all felt rather childish and indulgent and pointless, but of course lensed beautifully.
I feel that within this three hour pointless dream-world there's a really taut 90 minute political satire about the commercialisation and erosion of journalistic values and the economic dependency of Mexico on America. But that's not the film Inarritu wanted to make.  What we end up with is the feeling of a director who is in a zipless fuck with his Mexican heritage. He doesn't actually want to engage with its colonial past or present. He wants to safely skate upon the surface of things. The result is an utterly superficial, uninvolving, unengaging meditation on ego.
BARDO has a running time of 174 minutes and is rated R. It played Venice, Telluride, Busan and the BFI London Film Festival. It will be released on Netflix on December 16th.
Posted by Bina007 at 09:20