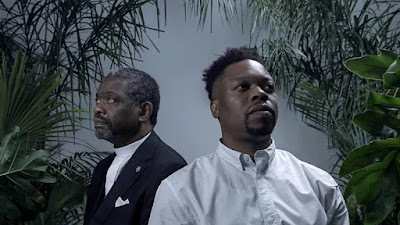 AFTER SHERMAN is a stunning new documentary from director Jon Sesrie Goff that's insightful, provocative and often visually stunning. His camera roams through the landscape of coastal South Carolina looking at the rural areas where his ancestors were slaves, and where after emancipation they were promised freedom on their own newly acquired plots of land. It's rare to find a film that feels so rooted in the land, and so well understands how our cultural and racial roots can be so liminal for those of third, fourth, fifth generations that somehow the rootedness of property - even property in a land that enslaved or colonised you - can become hyper-important and symbolic.  I see that same search for a physical representation of belonging and birthright in the Asian diaspora too.
What is shocking for a British viewer, not as well versed as one might be in contemporary and historic race-relations in the South, is how far the relationship to a particular state might remain fraught. We see it again and again in this documentary, with people discussing their decisions to leave the South and head North for jobs - their experience of comparative racism in either place - and sometimes, in their decision to head back "home".  One of the most powerful moments is a casual conversation among contemporary young black Americans discussing where to live, and you just realise the weight of politics that sits within that conversation.
The documentary is also powerful for showing us how the fight for civil rights is intertwined with the black church, and its central role as a rallying point, community builder, and truly self-owned institution in a world where few if any institutions are open to the black community.  To see some members of the church express faith, deep faith, and the ability to forgive, is humbling - if perhaps baffling - to a person of no faith.  That centredness on the church stems from Jon Sesrie Goff using conversations with his father, a minister, as a framing device and through line for his film.  That I left this film feeling a sense of hope and understanding, despite the fact that it frankly discusses racially motivated violence, is a tribute to all involved.
AFTER SHERMAN has a running time of 88 minutes. The film played Tribeca 2022 and is playing the BFI London Film Festival.
Posted by Bina007 at 14:46