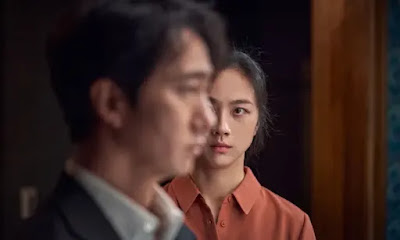 If DECISION TO LEAVE were made by anyone other than Park Chan Wook would it have been programmed in the BFI London Film Festival?  Because let's be clear, name recognition of a former icon aside, there was precious little in the first hour of this film to indicate we were watching a film of note.
As the movie opens we discover than old Korean functionary has had a deadly accident while mountaineering.  His young Chinese widow (Tang Wei - LUST, CAUTION) is under surveillance by Korean cop (Park Hei-Il). She doesn't seem to grieve and isn't surprised by his death as he was apparently being blackmailed.  She also murdered her own mum and is on the run from the Chinese authorities.  She claims it was a mercy killing.
For the first hour of the film that's all we get. Her being opaque and him becoming obsessed with her. But zero sexual chemistry or suspense. The only actual entertainment is from the cop's comedy sidekick who suspects the widow for xenophobic reasons and literally does drunken pratfalls.
Maybe it turned into a masterpiece of VERTIGO like plotting and LUST/CAUTION style sexual chemistry in its final hour. I didn't stick around to find out. And reading reviews I feel like this film is the Emperor's New Clothes. No matter how good the final hour was or wasn't there's no excuse for the indulgence of the first.
DECISION TO LEAVE has a running time of 138 minutes.  The film played Cannes 2022 where Park Chan Wook won Best Director. It also played Toronto. It was released in the USA this week and will be released in the UK the following week.
Posted by Bina007 at 10:18