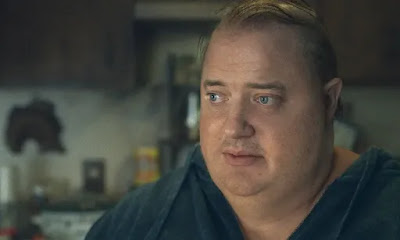 In all my years of attending the BFI London Film Festival I have experienced three standing ovations. The first was joyous, riotous applause for WHIPLASH. The second was, I felt, performative, and was for 12 YEARS A SLAVE. The third was last night for Brendan Fraser, in Darren Aronofsky's THE WHALE.
To be sure, the audience cheered wildly for him even before the film. Perhaps this reflected an acknowledgement of everything he has been through over the past decade, and a warm gratitude that he's simply back.  Perhaps it reflected anticipation for a performance that has been widely and warmly reviewed. But I've never seen anything like the flood of warmth that rolled over the auditorium and toward Fraser before a single scene had been shown. His humility, gratitude, and awkwardness was evident.
Once the film was done, the audience stood and applauded Fraser, who alongside director Aronofsky and playwright Samuel D Hunter, had been watching with us.  Fraser moved slowly through the hall toward the stage once again, evidently moved to tears, as he had moved us to tears. He shook hands with members of the audience and when he reached the stage he took a long, deep, bow.  This is a profound moment for him, and one that is richly deserved.
I say all this to explain what happened last night - the shared communal experience of intense emotion - as an example of cinema at its finest. When a work of art can profoundly move.  I did not cry during the film, though many did. I cried seeing Fraser's reaction to our outpouring of love.
This film is one that is so full of humanity it can feel overwhelming. A film so full of hope and empathy and persistent attempts at connection that it is incredibly uplifting. And the entire cast is outstanding.  Brendan Fraser wears heavy prosthetics to play Charlie, an online university teacher who is dealing with grief by over-eating to the point of being close to death.  He is clear-sighted, sure of his intentions, and even when confronted with crass attempts at religious redemption retains his calm patience.  Charlie is trying to reconnect with his daughter Ellie - a whipsmart, angry, fierce teenage girl portrayed by Stranger Things' Sadie Sink in what surely must be her breakout cinematic performance.  This attempt at reconciliation is eventually rumbled by Ellie's mother Mary (Samantha Morton) - a woman we think is going to be angry and mean, but is actually kind and hurt and damaged but still full of love, just like her daughter and just like Charlie and just like his best friend, Liz.  How wonderful to see Hong Chau back on our screens in a role befitting her talent, so far from the caricatured role in DOWNSIZING.  Liz sees herself as Charie's protector and guardian from anything that might cause pain in his final days, not least a young missionary played by Ty Simpkins.
What follows is a film that is raw, honest, darkly funny and thought-provoking.  Its subject matter is the hypocrisy and cruelty of religion; the way in which people self-medicate to handle rejection, anger and grief; and the need for authentic, honest, brave communication. Every character is using some form of drug to cope with life, whether Charlie's compulsive eating, Liz' smoking, Mary's drinking or the kids smoking pot. This is a film that says life is rough, but better to face it truthfully and to have the courage to let love in.  All of that is encapsulated in the performance of a liftetime from Fraser - a performance of bravery, nuance and good humour - and one that deeply connected with the audience.
THE WHALE has a running tie of 117 minutes It played Venice and Toronto 2022 and is playing the BFI London Film Festival It will be released in the USA on December 9th.
Posted by Bina007 at 08:57