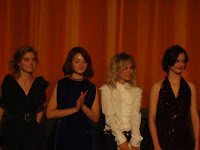 CRACKS is a coming-of-age drama set in a British girls boarding school in the 1930s. Eva Green plays the glamorous Miss G who holds the diving team in thrall, particularly the captain, Di (Juno Temple.) The order is upset when an equally glamorous new girl arrives. Fiamma is Spanish, an aristocrat, beautiful and has travelled widely. Her self-possession and sophistication stands in sharp contrast to the other girls, and Miss G soon makes her a favourite, upsetting Di. The majority of the film deal Di vacillating position in coming to terms with Fiamma’s usurpation and Miss G’s increasingly unhealthy obsession with her. The cracks of the title refer to the girls finding the cracks in Miss G’s persona, and in their faith in authority.
This story is nothing we haven’t seen before in film such as THE PRIME OF MISS JEAN BRODIE and turns out to be rather more obvious and less seditious than that seminal work. The production values are all top notch (superlative photography from John Mathieson and a particularly good score from Javier Navarrete) but the story is intensely predictable from the start. In particular, anyone who sees that Fiamma has a breathing problem in the first reel can see where the movie is going. The enjoyment is thus comes from the little moments that ring true. I loved a scene where the girls prepare for a midnight feast, and another where they get excited/disappointing by the arrival or lack thereof of post from home. Anyone who went to a boarding school will agree that these moments are marvellously well done. Juno Temple gives a strong central performance as Di, and Eva Green is strong as Miss G. In terms of conveying a magnetic sexuality that inspires high school crushes, Green is just right. But I do question casting her given her accented English, or at least casting her without changing her name to hint at a more cosmopolitan heritage. But then that would work against a key point in the plot
Overall, while CRACKS is certainly an assured debut feature from Jordan Scott (daughter of Ridley) it‘s high quality production is almost too good for the rather hackneyed story of a high school infatuation gone wrong.
CRACKS played Toronto and London 2009. It will be released in the UK on December 4th and in France on December 30th.
Posted by Bina007 at 20:00