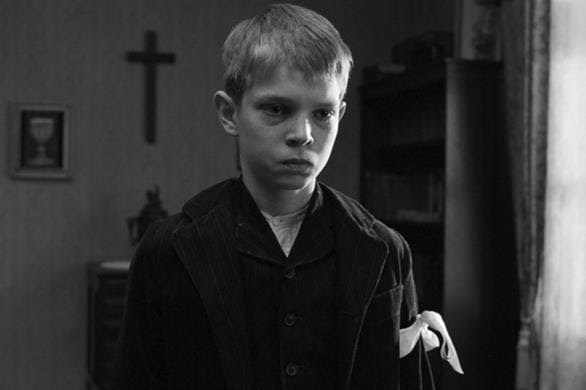 Michael Haneke makes films that toy with the audience - whether with malicious black humour in FUNNY GAMES or with subversive, slippery political provocation in CACHE/HIDDEN. He hates clear-cut answers and stories that claim that life is more simplistic than it really is. He is concerned with human nature and the cruel violent and sexual impulses that lie behind the facade of bourgeois life. All these preoccupations are visible in his beautiful, disturbing, Palme d'Or winning new film DAS WEISSE BAND - A GERMAN CHILDREN'S STORY.
In terms of toying with the audience, this starts with the very title of the film. DAS WEISSE BAND or THE WHITE RIBBON is translated for non-German audiences, but the beautifully written sub-title isn't. Haneke claims that this is because the story should resonate for people whichever country they are from, rather than being read as a particularly German fable, but then why have the sub-title there at all, untranslated and provocative. The games continue with the first image of the film, shot in pristine black-and-white. This serves as a distancing device that panders to our images of the early twentieth century, in black and white photos. The distancing also comes through the employment of a voice-over from one of the characters in the film, who admits in the first line of the film that he can't be sure that he's remembering events correctly after all this time. In other words, nothing we are to see can be taken at face value.
The tale that unravels is certainly concerned with sexual violence and cruelty. It is set in a North German town in the year before World War One, but could easily be depicting a world from centuries before. The town is oppressed financially, under the feudal system under the Baron, and by the fierce religious morality enforced by the town priest. A young boy is forced to wear a white ribbon to remind him of the purity to which he should aspire. But more violently, each night his hands are tied to the side of the bed by his pastor-father to stop him from masturbating. Naturally, this being Haneke, superficial rigid morality disguises physical and moral corruption - incest, murder, arson, theft, adultery. Adults brainwash children, but act like wilfully, as children. Children are either presented as cherubic paragons of virtue or as sinister and in mobs. For every scene that is heartbreakingly beautiful there is a scene that is perverse and frightening.
There is no doubt that DAS WEISSE BAND is a great, beautiful, challenging, multi-faceted film. You can watch it for the sheer joy of the composition of the photography, or for the tense portrayal of an oppressed society. No doubt some will watch it, reductively, as a story of how the generation who became Nazis was formed. But this movie is much richer, and more applicable, than that.
THE WHITE RIBBON played Cannes, where it won the FIPRESCI prize and the Palme d'Or, and Toronto 2009. It was released in September in Germany and Austria. It is currently on release in Belgium and France and opens next week in Greece and Italy. It opens in the UK on November 13th, in the Netherlands on November 19th, in Sweden on December 11th, in Norway on December 26th, in the USA on December 30th and in Russia on January 12th.
Posted by Bina007 at 23:53