London Film Fest Day 5 - UP IN THE AIR 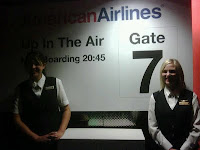 My friends typically work for former-I-banks, private equity houses and fund managers, and travel to at least one European or long-haul destination per week. They are nice, interesting people but every time we get together the conversation at some point descends into comparing airline frequent flyer programmes, blackberries and check-listing the best restaurants and concierges in various European capitals. We are the cohort that knows exactly the quickest route through any airport and always turn left upon boarding. But that's not all there is to life. Some have kids - some an unhealthy obsession with movies. We are all aware that the big corporates target insecure over-achievers: smart young graduates who will so identify with the corporate brand that their self-esteem lies in the coolness of their new laptop and how many miles they fly per year. It's as though the apparently elite status they have been sold compensates for working insane hours. Stick with it, kid, and one day you TOO can become a Lufthansa Hons member and make Managing Director. We too were once shiny bright 23 year olds, unleashed upon the world with dreams of summer houses and Porsche Cayennes. Ten years later, the 2001 dotcom crash and the credit crunch later, heartbreak, marriages, divorces have come and gone, and we'll settle. And no, it doesn't seem like failure.
I give you this little round-up to tell you that when it comes to reviewing UP IN THE AIR - the new romantic comedy from THANK YOU FOR SMOKING director Jason Reitman, I know whereof I speak, and I know whereof he speaks. Problem is, I think he's set up a straw man. The fact that he occasionally hits the mark with some biting dialogue doesn't make up for it.
Reitman's central character is a mono-dimensional corporate man called Bingham (Clooney). He's the classic air-miles junkie, happiest in the air, avoiding a real relationship with his family or a potential girlfriend at all costs. The movie is about how he reacts when he falls for a whip-smart woman who is just as career-focused as he is (Vera Farmiga). Along the way, he realises just what a shitty profession he is in (a consultant brought in to fire people) when he sees it afresh through the eyes of the new hire (Anna Kendrick). Reitman has Bingham go through one of those classic rom-com epiphanies, where the caricatured hard-ass central character realises it might actually be nice to have a relationship with someone. (See THE PROPOSAL, THE FAMILY STONE, MANAGEMENT et hoc genus omne). It even comes complete with a running through the night to tell the one you love that you love them scene. I only just forgave Reitman for that hackneyed move. The problem is that the really interesting dynamic isn't about ultra career focused people suddenly realising they'd like a relationship. It's about people, like the new hire, who do want both, know they want both, but can't seem to make it work out. That's the rub.
Anyways, let's be generous and grant that Jason Reitman's fictive career-focused lone wolf is credible and interesting. Given that, how does the movie work out? Well, I like the overall bleak tone, especially the final act twist. Totally brought it back from the rom-com vibe I was getting in the penultimate act. I also really like the way in which Reitman plays the scene between the career woman at 23 and the career woman at 33: very psychologically accurate and superbly done. Other than that, I thought the movie contained too much dead air, and much like THANK YOU FOR SMOKING, wasn't even in tone. Ultimately, I wasn't engaged by the characters, because the central struggle didn't seem real to me, and I thought Reitman didn't really have the balls to deal with the critique implicit in his subject matter of mass lay-offs. It all felt rather exploitative.
UP IN THE AIR played Toronto 2009. It opens in November in the USA. It opens in January 2010 in Australia, Spain, Sweden, Belgium, France, the Netherlands, Norway, the UK, Russia and Denmark. It opens in February 2010 in Mexico, Turkey, Hungary and Singapore. It opens in Finland on March 19th.
Posted by Bina007 at 22:15