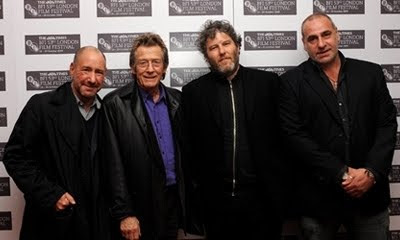 44 INCH CHEST is the debut feature from Malcolm Venville and written by the people behind the superb British gangster thriller SEXY BEAST. SEXY BEAST was not only magnificently profane and visually stunning but it took Sir Ben "Gandhi" Kingsley and presented him as possibly the most scary gangster this side of the Thames. Any script that could allow such a transformation was worthy of praise. 44 INCH CHEST is transformative, but not in such a powerful or compelling a manner. It starts off in the comfort zone of British gangster movies. We open with a plus suburban home wrecked in a vicious fight, and Ray Winstone's character, Colin Diamond, lying on the floor looking dazed. We then watch four mangy-looking East End gangsters, played by four outstanding British actors (John Hurt, Ian McShane, Tom Wilkinson, Stephen Dillane), abduct a French waiter and gather in a vacant house. There friend Colin has been cuckolded and they, as good friends, are going to facilitate him exacting revenge on the fucker locked in the cupboard and the cheating wife. The twist in the tale is that Colin Diamond, East End gangster that he is, really loves his wife, and knows that if he kills her lover, it'll be over between them for good. What then follows is a slow burn psychological thriller, and the lads wait for Colin to beat up Loverboy, and Colin builds up the stomach to either do that or, worse still, tell his mates that he's setting him free.

The movie looks great - all grimy, discoloured yellows and browns. John Hurt puts in a bravura performance as Old Man Peanut - the meanest of the gangsters - but McShane, Dillane and Wilkinson are fine too. There's also a lovely little cameo of Steven Berkoff losing a packet at, what happens to be, the casino I frequent in Mayfair. The script is taut and full of some beautifully inventive swearing. I really admire screen-writers Louis Mellis and David Scinto for trying to explore the pyschological workings of Colin Diamond. Problem is, as the movie progresses, I found myself becoming as frustrated as the lads waiting for Colin to get on with it. Maybe I'd been mis-sold. Maybe I'd been misled by the momentum of the early scenes. But, in the end, despite the solid gold cast and script, this movie didn't really work for me.

44 INCH CHEST is already on release in Australia. It opens in January 2010 in New Zealand and the UK.