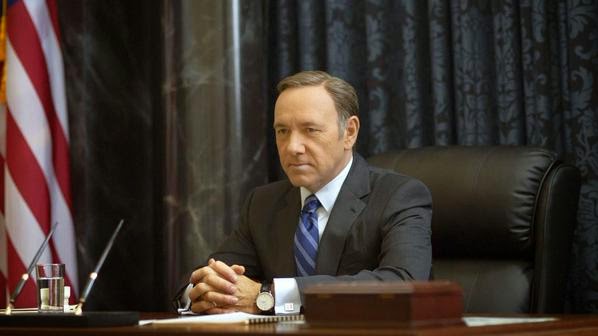 COMMENTS: What seems like another holding episode where the pieces are put in place on the chess board.  I must say that I find the UN story rather dull, and once again Claire's manipulation of the Russian ambassador seems to easy, compared to her deeply felt setbacks in season two.  A nice tidbit about the Underwoods not sleeping together. I hope that goes somewhere.  By contrast, what I don't want to see go anywhere is the supposed sexual tension between Jackie and Remy. Dull, dull, dull.  Finally, great to see Kim Dickens cast as the White House press correspondent for the Telegraph.  Other than that, however, this is not an episode that is either visually striking or particularly wickedly intriguing.

PLOT SUMMARY: Francis declares unemployment a national emergency & so has FEMA report to him. DC is declared in a state of emergency & FU promises full employment in 12 months. FU  persuades House Majority Whip Jackie Sharp to declare against him & so lure the women's votes away from Dunbar before then backing FU. Remy Danton also pressures Jackie to marry her boyfriend Alan to ensure a family image and she succeeds in getting engaged. Remy, her ex-lover, is clearly jealous.  Congressional leaders threaten to pass a law preventing FU's use of FEMA funds but he sounds unworried.

Seth realises that the Telegraph has sent Ayla's boss, Kate Baldwin (Kim Dickens), to cover the White House is her place. She finds out that the Director of Homeland Security has resigned quietly because of the FEMA plan but he refuses to go on the record. The director of FEMA, however, leaks to her his expectation of massive natural disasters over the year ahead and therefore of the danger of depleting the relief fund to finance FU's employment plans in DC.  When the story breaks, FU blows smoke by getting Remy Danton to lure author Tom Yates as his biographer and salesman for AmWorks.

We realise that Francis and Claire never sleep together.   At the UN, Claire has lost consensus and the vote for the multilateral force is delayed but she then manages to threaten the Russian Ambassador into backing down and releasing Corrigan. Given that the Jordan Valley is occupied territory, FU can station troops there and shoot down Russian planes flying in support of Iran without first getting Congressional approval.

Catherine Dunbar publicly campaigns with gay activist Corrigan's husband.  She is reticent to accept Doug Stamper's help, and refuses to use the story that Claire lied on national TV,  but still hires him.
Posted by Bina007 at 14:34