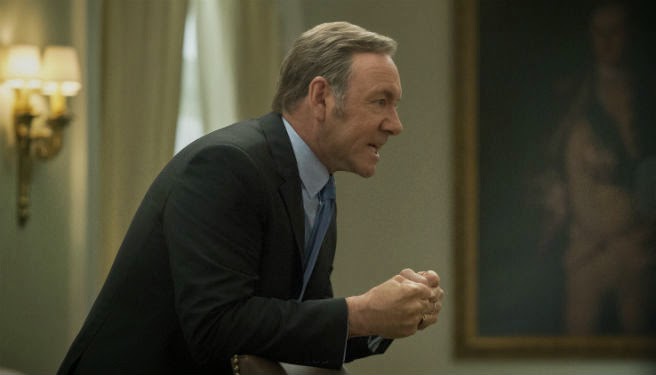 COMMENTS: Just about the most exciting thing about this episode were the closing credits showing a spoof MTV-style video for a Pussy Riot-style anti Russian government punk song.  The rest of the episode was just well-made but essentially rather dull opening gambits in a diplomatic war between the USA and Russia.  Claire's manipulation of the Secretary of State is almost laughably easy and the tension caused by That Kiss is immediately undone because we know Francis and Claire are so tight.  In other words, this is a holding episode - the writers are just getting all the pieces in place on the chess-board before truly beginning the assault. Dull but necessary.

Claire Underwood appears to be conciliatory toward Secretary of State Catherine Durant (Jayne Atkinson) as they engage in delicate Middle East peace talks.  She fears her charm offensive is failing, but a game of beer pong after the State Dinner seems to have restored their good relations.  They share a confidence that they disagree with Francis' plan to ally with Russia and would prefer a UN led multilateral peace keeping force if they can circumvent the Russian veto. Claire shares the plan with Francis.

At the State Dinner, Francis is loquacious but three young Russians openly criticise his authoritarian policies. Petrov sees through Claire's charms & tells her Francis is pimping her out. Still, after insulting his little pickle, Petrov dances with Claire and kisses her fully on the lips in front of everyone.  After the dinner Petrov tells Francis he wants the European missile defence shield dismantled in exchange for his support.  Francis agrees to some of his demands but not to a press conference.  It's a bluff. He makes a unilateral press statement, pinning a change of heart on the protests at the state dinner.  Claire, Francis and the Secretary of State are all now aligned in isolated Russia at the United Nations.

Hacktivist Gavin Orsay continues to be blackmailed by the FBI into working for them, and later suggests a meeting with Doug Stamper.  Meanwhile, Stamper is wooed by the Junior Congressman from Hawaii to be his special advisor. The offer is so generously paid that Doug accuses Seth of having set it up to get Doug out of the way.
Posted by Bina007 at 12:56